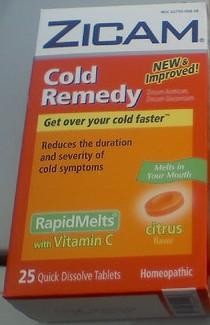 It seems like a simple lawsuit: A St. Louis woman has just filed suit against the makers of Zicam, a homeopathic home remedy that you can take orally or shoot up your nose. She claims that the drug caused anosmia, or loss of the sense of smell. (read the full complaint here)

But she's not the only one. Consumers started complaining to the FDA about this in 1999. In 2006, the company entered into a multimillion dollar settlement with a bunch of people also claiming a loss of smell.

And right now, as local woman Sue Weber sues Zicam's makers -- the Arizona-based Matrixx Initiatives -- the drug is back in the news for two reasons: First, it just paid out $429,000 to California residents who'd sued over what they considered misleading packaging.

More importantly, all kinds of regulators and business folks alike will be watching very closely next month, when the Supreme Court hears a case on whether Zicam's makers violated SEC regulations by failing to notify their investors of the anosmia problem.

Looks like Zicam's got bigger problems than the sniffles. Lol! Sneeze.

Bidness See You in Court!