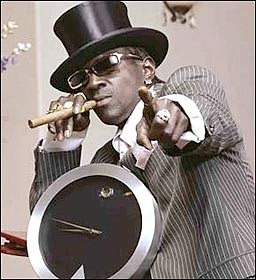 Metro east police officials have long argued that late-night violence at East St. Louis bars and clubs is largely to blame for the city's crime woes. After this weekend, the cops have yet another piece of evidence to back up their claims.

The Belleville News-Democrat has the scoop on some gunplay that went down early Sunday morning at Club Flava in downtown East Boogie.

Around 4:45 a.m, police were called to the club at 236 Collinsville Avenue. Three guys had been kicked out. One of them, detectives said, told the bouncers that he was "going to shut the club down." That did not mean he was planning to stick around for last call.

After being kicked to the curb, the guy came back with a gun and "started shooting up the front of the business."

A club staff member -- police did not specify if it was a bouncer or security guard -- took a bullet to the chest. As of yesterday afternoon, the victim was in stable condition at a local hospital.

The first police officer on the scene got a good look at the shooter before he sped off in a car that was described as a dark blue Pontiac Grand Am with Missouri license plates.