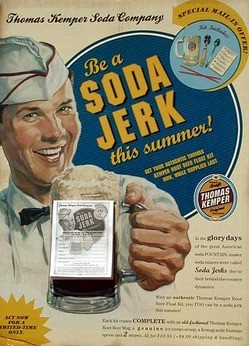 This is why Missouri, a.k.a. the "Meth Capital of America" needs to make pseudoephedrine a prescription-only drug, according to Missouri Attorney General Chris Koster.

Last month a judge in Adair County sentenced Stephen Munn to 12 years in state prison after he pleaded guilty to possession of controlled substances and resisting arrest. Munn had a previous conviction in 2005 for possessing drug paraphernalia related to methamphetamines.

In a statement yesterday, Koster said that when officers arrived at Munn's Kirksville residence to serve a search warrant, he resisted arrest by fleeing. During the subsequent search of his apartment, officers located controlled substances, as well as equipment used to manufacture methamphetamine. Officers also discovered a wanted felon at the home.

But here's where it gets good: Koster said Munn had also been using a mentally challenged man who was in his care to purchase pseudoephedrine to make meth in exchange for providing him soda.

Earlier this week Koster and Missouri governor Jay Nixon announced that they are backing legislation that would ban the over-the-counter sale of pseudophedrine (such as Sudafed). Oregon and Mississippi have a similar law in place and have seen their meth-related arrests drop dramatically.

"This is just another example of why we need to have more stringent regulation restricting access to pseudophedrine," said Koster. "Stephen Munn was responsible for the well-being of a mentally challenged man and used him to purchase the main ingredient needed to manufacture methamphetamine. This is unconscionable, and I am grateful that the defendant will be removed from society for years to come."