Mizzou Ends Season No. 12 in Nation, To Be Rewarded with Crap Bowl vs. Crap Team 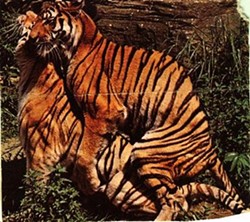 After a 35-7 smack down of the Kansas Jayhawks on Saturday, the Missouri Tigers ended their regular season at 10-2 and have hopscotched up two places in the BCS rankings. Missouri is now ranked No. 12 in the nation.

Based on that status, one might think that coach Gary Pinkel and crew could find themselves gearing up for a prestigious bowl game -- you know, a bowl that doesn't have a .com in its name.

Well, maybe. But don't count on it.

Despite representatives from the Orange Bowl attending Saturday's game at Arrowhead, Mizzou isn't expected to get an invite to that game. Same goes for the Cotton Bowl, which still recalls how Missouri fans failed to sell out its allotment of tickets back in 2007.

So, what's left for the Tigers? Perhaps the Insight Bowl in Tempe, Arizona, which snubbed the Tigers last year for Iowa State. Or, maybe the Holiday Bowl in San Diego. Actually, at least two bowl-game-prognosticators have Missouri playing the Holiday Bowl on December 30. And they have Missouri playing the University of Washington Huskies -- a team whose record currently stands at 5-6.

The headline at bleacherreport.com says it all: Where Will Screwed Big 10 and Big 12 Teams End Up?