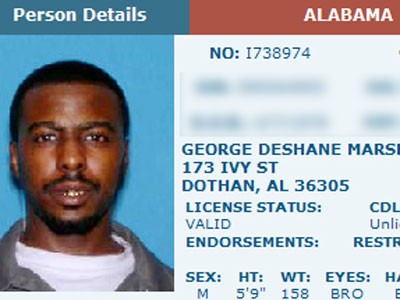 Fed authorities yesterday arrested Dante Sumlar, the man they say is the mastermind behind a counterfeit check ring operating in St. Louis since 2009.

Before arriving in the Gateway City sometime late last year, Sumlar -- a.k.a. "Tony" a.k.a. "Micah Riggins" a.k.a. "George Marshal" -- was wanted in Florida and Texas for counterfeiting charges and wanted for questioning in Jacksonville for a 2006 homicide.

In 2008 Sumlar was featured in an episode of America's Most Wanted, in which he was described as a cunning "Billy the Kid" type fugitive.

The TV show reported how, while at a Red Lobster in Florida in 2007, Sumlar saw a police officer dining in the restaurant who'd arrested him on previous charges. As he left the building, Sumlar handed a note to the server to deliver to the cop, wishing her a good day and informing her that he'd picked up her tab -- which he did not.

According to the U.S. Attorney's office in St. Louis, Secret Service agents had been tracking Sumlar -- known only as "Tony" -- for months before learning his true identity. He's been charged with possession of counterfeit securities allegedly used to distribute bogus checks to be cashed at various banks throughout the St. Louis area.

If convicted, the current charges carry a possible sentence of 10 years in prison and/or a $250,000 fine.

The 33-year-old Sumlar has eight gold teeth, according to AMW, and two teardrop tattoos under his right eye.