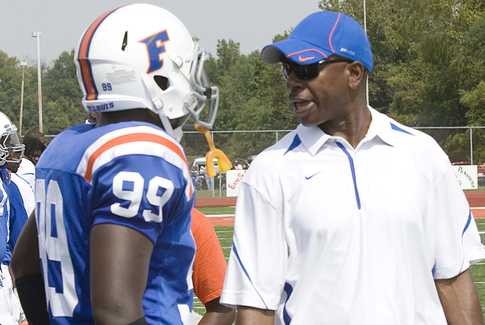 Despite the best efforts of the Illinois High School Association, East St. Louis head football coach Darren Sunkett will be on the sidelines this postseason.

East St. Louis' outstanding quarterback/defensive back Glen Faulkner has been selected to play in the U.S. Army All-American Bowl, an honor reserved for the most elite high school players (previous attendees have included the likes of Adrian Peterson, Reggie Bush and Tim Tebow).

Coinciding with Faulkner's achievement, Sunkett has been invited to travel to San Antonio for the All-American bowl in January and attend the U.S. Army Coaches Academy. A press release sent out yesterday describes the program as "an elite three-day learning experience" that features NFL and NCAA coaches. Sunkett and other high school coaches with All-American players will also "participate in game-week activities."

A spokeswoman for the Army All-American Bowl seemed unaware of the controversy surrounding Sunkett and his program this season.

The Belleville News-Democrat has been all over the East St. Louis football goings-on, breaking the story earlier this year that star defensive end Charles Tigue lived outside of the East St. Louis school district while playing for the team. The residency violation was discovered in part because Tigue was out on bond on an armed robbery charge and was wearing an electronic ankle monitor that tracked his whereabouts.

Because Tigue played in several games this season, the Illinois High School Association ruled that the team had to forfeit their first five wins, making them from ineligible for the 2010 playoffs. The Flyers were heavy favorites to win the state championship.

In addition to Tigue, the father of the team's running back alleges that Sunkett gave his son Anthony Pierson -- who is also Sunkett's nephew -- clothes and a car to transfer to East St. Louis from St. Louis' Gateway Tech. Based on that claim, former East St. Louis mayor Carl Officer sent letters to local prosecutors calling for "a formal investigation" into "allegations of fraud, theft and pay-to-play."

Asked about the controversy, U.S. Army All-American Bowl spokeswoman Sonya Lewis said flatly, "I don't know about that." Lewis said Sunkett's travel expenses to San Antonio are paid for. Lewis declined to address any concerns the Army All-American Bowl might have about Sunkett's interaction with other standout high school players during Bowl week and did not respond to a subsequent email.

A message to the East St. Louis High School Athletic Department was not returned.