Jenna Fischer in A Little Help: See it Sunday! 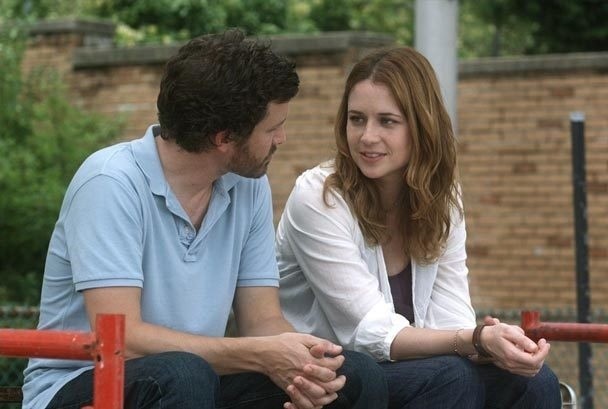 You've already read our interview with St. Louis daughter and The Office actress Jenna Fischer (and surely you saw the WashU-namedropping episode of The Office last night). Why not take the next step and see Fischer on the big screen this weekend?
Fischer's latest film, A Little Help, will screen at the Hi-Pointe Sunday at 4 p.m. as part of SLIFF. Fischer is scheduled to be in attendance to receive the Cinema St. Louis Award.
Check out our review of A Little Help behind the jump.
A Little Help, the feature film debut for writer-director Michael Weithorn (a long-time producer and writer for television shows including The King of Queens and Family Ties) is all about the lies that we tell, whether to comfort ourselves or impress others. Laura, a dental hygienist (played by St. Louisan Jenna Fischer of TV's The Office, here in her first starring feature role) is existing quietly and miserably in her sexless, loveless marriage to Bob (Chris O'Donnell) and constantly bickering with her twelve-year-old son, Dennis (Daniel Yelsky). Then Bob dies suddenly of an arrhythmia, and everything changes. Dennis is sent to a new school, where he tells his new classmates that his Long Islandreal estate agent father was actually a New York firefighter who died a hero on September 11. And while Laura doesn't seem to much notice her husband's death, she suddenly begins to realize her attraction to her sister's husband, Paul (Rob Benedict), who has harbored feelings for her since high school. The emotion is just close enough to authentic that you'll stick with it, despite some flaws. But in the end, when the characters' lies inevitably catch up to them, the film concludes with a whimper instead of the hoped-for bang.