How Realistic is the Ibogaine Episode of Law & Order: SVU? 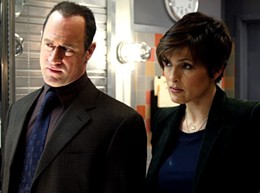 This week's feature story, "Shock the Junkie" takes an in-depth look at ibogaine, a potent hallucinogenic drug that's derived from the roots of an African shrub and used as a treatment for drug addiction.

Ibogaine has been around for decades but remains relatively obscure. It's outlawed in the United States but unregulated in many countries, including most of western Europe, Mexico and Canada.

Hunter S. Thompson introduced America to ibogaine way back in 1972 when, while reporting on that year's presidential election for Rolling Stone, he hypothesized that Democratic nominee Ed Muskie was under the influence of ibogaine on the campaign trail.

More recently, ibogaine made the leap into the American mainstream when it was portrayed as a miracle cure for heroin addiction on NBC's Law and Order: Special Victims Unit.

As of yesterday, the episode could be streamed in full for free on the website TV Dome but the site now appears to be kaput. However, a version edited to show just the parts that involve ibogaine can be found on the website My Eboga, along with links to other ibogaine videos.

While the show is obviously over-dramatized fiction, its portrayal of ibogaine is mostly grounded in reality.

The episode's plot revolves around the rape and murder of a young girl in a seedy hotel room. The cops find out she was checked into a shady rehab clinic called "A Sheltered Place," and suspect that the guy who runs the place was an accessory to the crime. They encounter a young heroin addict named Enzo (the victim's love interest) who is staying at the rehab center and willing to testify against Martin Gold, the owner of "A Sheltered Place."

The cops, though, are worried that the jury will disregard testimony from a strung out witness. Huang, an FBI agent/doctor, suggests ibogaine. He claims it "works 91 percent of the time" to cure opiate withdrawals and cravings. (The 91 percent statistic is completely made-up; an ibogaine treatment provider interviewed for our story said about 20 percent of her patients end up staying clean; research on the long-term efficacy is currently underway.) Huang tells the cops that ibogaine is illegal and hasn't been developed for widespread use by drug companies because "the patent has expired" (true) and feel they can't make a profit off of a one-time use medicine for junkies (also true, according to several people interviewed for our story.)

Of course Huang risks his medical license -- cue the tense music -- because the Hippocratic oath demands that he help people who are sick. When the drug is administered, Enzo the junkie is told "he'll feel a warm sensation on the back of his neck" (true again, according to experienced users) and then we get a trippy montage and a cut to the courtroom the next day, where Enzo looks fresh-faced and sober. The ending is only half-true -- experienced users say ibogaine is a grueling experience that lasts up to 36 hours. It causes intense nausea and other side effects that can leave people weak and bedridden for days after their trip.

But as cheesy and partially fictionalized as it is, many members ofthe ibogaine subculture credit the SVU episode with raising the American public's awareness about the alternative addiction treatment. At the Mexican clinic featured in the story, one teenage heroin addict from Washington state credited the show with giving him and his family the idea to try ibogaine rather than regular rehab, which he'd unsuccessfully undergone several times before.