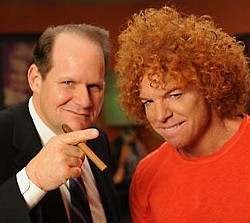 Looking for something to do this evening?

We suggest heading over to Plaza Frontenac for the 7 p.m. premiere of Close But No Cigar, a new film by one of Riverfront Times' favorite St. Louis barristers, Jay Kanzler.

Following is a recap of the movie, which we'd give a solid four stars -- if we did that sort of thing.

Why do some people make it, while others of equal or greater talent never achieve similar success? That's the question St. Louis filmmaker Jay Kanzler attempts to answer in his documentary about Bob Zany, the cigar-chomping comedian who's approached stardom during his three-decade career -- but never quite hit the big time. Using archival snippets of Zany appearing on everything from The Gong Show to The Tonight Show, the film highlights the comedian's upward trajectory in the '80s and '90s as he performs alongside heavyweights such as Rodney Dangerfield, Jerry Lewis and Drew Carey.

That was then. These days Zany makes a living doing standup in glamorous venues like the Best Western hotel ballroom in Fort Dodge, Iowa. And while the greater public may not fully appreciate Zany, the same cannot be said of his fellow comedians -- including Frank Caliendo, Carrot Top (whom Zany defeated on Star Search) and Fred Willard -- who struggle to explain why this "comic's comic" isn't more famous. One suggestion they offer: Perhaps Zany's career would benefit from one of those hourlong specials on HBO or Showtime. Thus begins the subplot of the film, as Kanzler and Zany organize and shoot a comedy special to sell to the cable networks. Will their plan work or, like Zany's career, will it be close but no cigar?