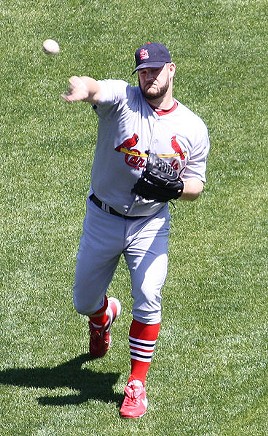 I freely admit I'm at least moderately anti-Twitter. I know, I know, as a blogger and therefore member -- at least in name -- of the New Media, I should love it. In fact, it's actually in my RFT contract that I'm required to praise and promote all social media when in public. But nuts to that. What have those guys ever done for me, other than pay me actual money to sit in front of my computer and spew angry nonsense day after day that no one reads? Oh. Well, never mind all that.
Regardless of my aversion to Twitter, I can't actually help myself from occasionally reading it. It never makes much sense, of course, given that you're basically just reading text messages sent to the world at large, but it's still fun. Especially when the Tweeter is some sports figure I have to personally cover.
So when my editor sends me an email about Brad Penny popping up on Twitter, I try to resist, but am helpless not to check it out.
Thanks to Penny's tweets, I now know he was praying for a deer somewhere in Iowa but is now back in Los Angeles, where he saw "Due Date" just last night. I also know I happen to agree with his review of said movie, having seen it myself about a week ago. Good cast, okay movie. I expected a little more than I got, mostly based on my love of Zach Galifianakis (who, by the way, has a rather awesome website of his own), but the whole thing felt a little less than the sum of its parts. So Brad and I have that in common.
It's also a little funny to note that Penny literally didn't tweet anything for about six months, from March to November, then seems to have decided about a week ago that he really needed to start using the thing. Thank God he did.
So go and follow him already. No, not on Twitter. Go and follow him around. I want to know if trying to shoot a rifle messed his shoulder up for 2011 or not.

Baseball Apropos of Nothing