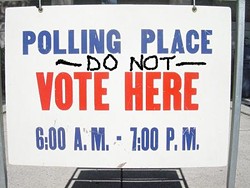 Advancement Project, a national voters' rights organization, is asking the St. Louis County Election Board to review the results and circumstances surrounding last week's race for the 24th District of the Missouri State Senate.

Republican John Lamping squeaked out a narrow victory over his Democratic challenger Barbara Fraser in the mid-county district, winning by 167 votes. That's a 0.29 percent margin of victory based on at total of more than 60,000 total votes cast for the candidates.

In a statement yesterday on behalf of Advancement Project, St. Louis attorney Denise Lieberman (former legal counsel for the ACLU of Eastern Missouri), questioned why Washington University students who voted in the 2008 presidential election were turned away from the polls on November 2.

"We received reports that students who were duly registered and voted at the polling site on Washington University's campus as recently as two years ago could not be found on the voter rolls at all, were turned away without being directed to their correct polling location and were expressly refused provisional ballots," said Lieberman.

Candidate Barbara Fraser has asked for recount of the election. Question is, Will that recount take into account the Wash. U. students who say they were denied a vote?

H/T St. Louis Activist Hub, who has been diligently following the issue since first reported last week on KSDK Channel 5.