The Amazing Story of the Quadruple Amputee Marine From Arnold, Missouri 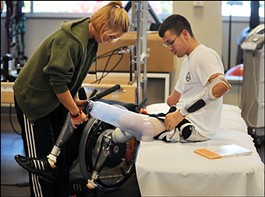 Today is Veteran's Day and, whether you're relaxing at home at the couch or grumbling about being at work, it's easy to lose sight of how much this holiday can mean to people who have either served in the Armed Forces or had a friend or family member enlist.

Fortunately, The Washington Post wrote a story to remind us why everyone should care.

The WP profiled Todd A. Nicely, a 26-year-old Marine from Arnold, Missouri who stepped on a device rigged with forty pounds of explosives earlier this year in southern Afghanistan. The blast, "broke his jaw, punctured his ear drums and left him, according to the latest statistics, one of only three men - a soldier and two Marines - from the wars in Iraq and Afghanistan to survive an attack as a quadruple amputee."

The fact that Nicely is still alive is incredible. That he is still loving life is even more amazing.

Here's an excerpt from the piece:

Late one night, he woke up and told her: "I don't know what's wrong."

"What do you mean, 'You don't know what's wrong?' " she asked, sensing he meant his injuries.

"Do you want to know what's wrong?" she asked. He said he did.

"Well, baby, you know you're missing your legs?" she asked.

"Did you know you're missing both hands?" she asked, crying.

He was quiet for a minute, then asked, "Did anybody else get hurt?"

"And that was the end of it," she remembered.

Grab some Kleenex and go read the whole thing: "On Veterans Day, honoring Marine who lost limbs in Afghanistan, but not spirit"