Citizens of Columbia Finally Atone for 1923 Lynching of Mizzou Janitor 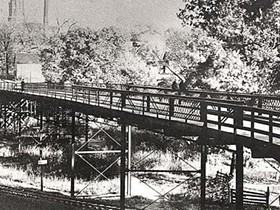 Back in the spring of 1923, someone raped fourteen-year-old Regina Almstadt, the daughter of a professor of German literature at the University of Missouri. Regina told Columbia police that the rapist had a Charlie Chaplin mustache and smelled of chemicals. Police arrested James T. Scott, a 35-year-old black janitor at the Mizzou medical school.

Scott insisted he was innocent. But eight days after his arrest, before he could stand trial, a 1,000-person mob, including Mizzou students and some of Columbia's civic leaders, dragged Scott from his jail cell to the Old Stewart Road Bridge. As the crowd laughed and jeered and prepared a noose, Scott continued to plead his case. He had a fifteen-year-old daughter of his own. He was convinced his cellmate was the actual rapist.

Hermann Almstadt, Regina's father, implored the mob to hold off until after Scott's trial, but shut up when they threatened to lynch him, too.

That night, James Scott died by hanging. The official report of his death neglected to mention that he had been lynched, and the secondary cause was listed as "committed rape." He was buried in an unmarked grave.

Now, 87 years later, the city of Columbia has decided to make amends.

Scott Wilson, a Columbia filmmaker, and the Boone County medical examiner's office lobbied state officials to change the official cause of death on Scott's death certificate. It will now read "asphyxia due to hanging by lynching by assailants." The "committed rape" part has been amended to "never tried or convicted of rape."

The old listing, Dr. Michael Panella, Boone County's associate medical examiner, told the Associated Press, "was done solely for one purpose. And that was to justify an unjustifiable and heinous act."

Last Sunday, November 7, another crowd of Columbians assembled on account of James T. Scott. But this time they were at the Second Missionary Baptist Church for a special service to raise money to give Scott a proper headstone. Speakers noted that Scott's murder was one of 4,000 lynchings in the United States between 1885 and 1923. Seventy-five of those happened in Missouri.

Among the speakers was Columbia's mayor, Bob McDavid, who said he'd only recently learned of the Scott lynching. But he observed that several people gathered in the church were old enough to remember the event.