Online revenue is growing for the Post-Dispatch's parent company -- but not nearly fast enough to replace the print advertisers being lost. 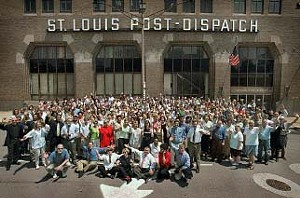 That's the latest news from Lee Enterprises, based in Davenport, Iowa. The St. Louis Post-Dispatch is the chain's largest newspaper.

In the company's fourth-quarter earning statement, released this morning, the company showed a $5.2 million profit. Last year at the end of the fourth quarter, the profit was just $1.8 million.

Adding to the troubled financial picture, newsprint and ink costs are escalating quickly -- they're up 40.2 percent this quarter, according to the company's statement. (That reflects "price increases and accounting adjustments," Lee says.)

So how are profits still up, overall?

We've got an answer, and it, more than anything we've reported so far in this post, is sad news for journalists and the readers who love them.

Circulation revenue is down. (That means fewer paying readers.)

Newsprint volume declined 6.2 percent. (That means fewer pages of newspaper are being printed.)

And, the number of full-time equivalent employees is down 5.4 percent. (That means fewer journalists, period.)

So that's the really bad news. The silver lining? The fourth quarter was better than the third -- ad revenue was 7.9 percent higher than the previous quarter.

And, perhaps even better, this quarter's numbers only go through September 26. And Lee believes that its revenue trend "improved markedly in October" -- something the company expects will continue in November. For all of their fellow scribes at the local daily, we can only hope Lee's projections are correct.