Washington Avenue to Get Beefed Up Security; City Hall Reacts to Violence Blamed on Bars 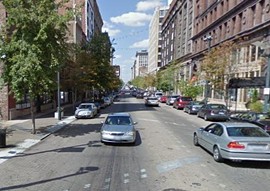 In the wake of a murder early Monday morning on Washington Avenue, officials with the mayor's office, police department and downtown business association have pledged to impose sweeping new security measures inside the city's popular nightclub district.

Following a two-hour meeting at City Hall this morning, the agencies announced plans to place additional officers on foot patrol on weekend nights, ban bars from hosting events for patrons under the age of 21, impose a street curfew on minors and install video cameras to monitor the area.

Twenty-year-old Travis Parker had attended an 18-and-up party at Sugar Lounge on Sunday night before being shot dead on the street soon after leaving the club around 2:30 a.m. Monday. Mayor Francis Slay's chief of staff, Jeff Rainford, said in a statement today that there was no evidence that Sugar was responsible for Monday morning's shooting and was, in fact, complying with city laws.

That said, today isn't the first time it's been suggested that police and city officials increase security along Washington Avenue. The owners of Lure Nightclub mentioned the same when they came under fire from City Hall for street violence associated with their club over the summer. Of course, today's action is a little too late for them. In September, the city stripped Lure of its liquor license.

Rainford and the owners of Lure could not immediately be reached for comment.

Below is a list of exactly how the various agencies plan to bolster security.

Downtown St. Louis Partnership:
• Four Downtown CID Guides will be dedicated to Washington Avenue until 11pm.
• The Downtown Partnership will add security cameras and monitor them.
• Form an advisory group to make recommendations.