For all you Central West End residents wondering what, exactly, has been under construction of late at Taylor Avenue between Lindell and Maryland, we've got good news -- it's a park.

Okay, so maybe it's more of a courtyard than a park, but it's still a public space where you'll be able to sit and enjoy the sunshine and, of course, the traffic. 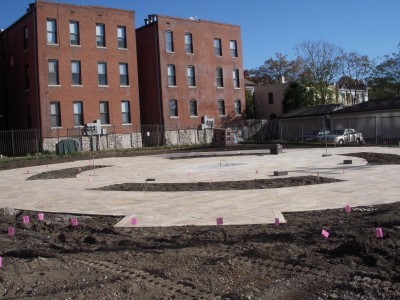 Nicki Dwyer, the blogger behind Nicki's Central West End, uploaded a copy of the design plans a few months ago. As you can see, the idea is to have a wide stone pathway encircling a fountain.

Currently, the stone pathway looks pretty much done. Construction workers have also mapped the site for irrigation, so presumably we'll have grass growing by spring. 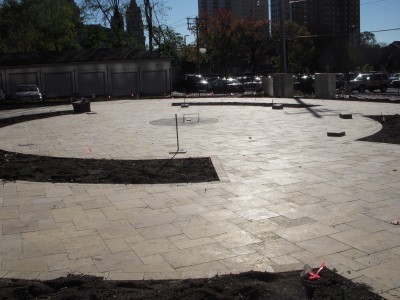 The site is the spot of the former CWE Dog Park. Apparently, the city obtained development rights as part of the deal that allowed Barnes Jewish Hospital to take over Hudlin Park.

That park, which was technically part of Forest Park, but located across Kingshighway Boulevard on the Central West End side, included tennis courts and playground equipment. The CWE Taylor Park, obviously, won't have either.

When Dwyer broke news of the design plans in June, her blog received comments from a number of angry neighbors, who didn't like the preponderance of concrete. "There is
enough concrete and hard surfaces in the CWE," one commenter wrote. "Just shows that the powers that be are not truly invested in making this a family friendly neighborhood."

So now that we can see the footprint of the park, what do think? Nice gathering space -- or more concrete in a neighborhood that already has plenty?