What Options Does Ed Martin Have Left? 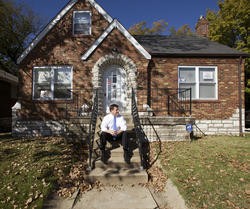 UPDATED below the jump.

But does it even matter? By all accounts, his narrow loss -- by approximately 4,000 votes -- precludes the possibility of a recount.

So what could Martin do to turn things around at this late hour? He could file an election contest in circuit court, in which he'd have to prove impropriety (so far, he's only alleged it).

As it stands, Carnahan's victory is not official-official. The city and county election authorities have two weeks to certify the results.
Then, the state's board of state canvassers must give their final stamp of approval by the second Tuesday in December. (Interestingly, that Board consists of the two judges and -- you guessed it -- secretary of state Robin Carnahan, who also happens to be the incumbent's brother.)

Once the state signs off on Rusty's victory -- and they often take this step before the deadline -- Martin would have 30 days to file a lawsuit (click here for the relevant statute).

Asked whether the candidate planned on contesting the election in court, his press secretary, Theresa Petry, says, "Right now we're just trying to get some questions addressed and answered."

In Martin's press release today, he claims that there were computer glitches on election day. This is true, but not in a way that would've seriously affected the outcome, according to

Laura Egerdal, spokeswoman for the secretary of state.

"For almost all eligible voters, there wasn't an issue," Egerdal says.  The issue arose when a tiny number of voters showed up and discovered their names were not in the poll books (for whatever reason).

At that point, local election officials trying to verify those voters' registration online through the state website could not, due to heavy traffic.

However, Egerdal points out, this did not affect the 3rd congressional district. Authorities in Jefferson County and St. Louis County used palm pilots to verify such voters, and St. Louis City quickly transitioned to verifying via databases that had previously been downloaded onto laptops.

"Although it did slow things down a bit, we did not hear of one case where a voter was not able to cast a ballot because of this," Egerdal says.

Martin claims that the city election board hired security from a firm that had also been hired by the Carnahan campaign. Without expressly stating it, Martin seems to suggest that the security officers somehow affected the election.

The candidate also claims that the late-night voting results coming from city precincts were "astonishing."

He calls secretary of state Carnahan to recuse herself from investigating these matters and to appoint a special investigator.

Egerdal says Carnahan has no statutory authority to launch an investigation, concluding: "If you look at the way Missouri sets up elections, it's very clear that authority is held on local level. It's a very secure and transparent process. The allegation that Robin needs to recuse herself doesn't make any sense."

A prominent member of Martin's own party suggests that the election results are probably on the level. Peter Kinder, Republican Lt. Governor of Missouri, told conservative pundit Dana Loesch on the radio today:

When you're 4,400 votes down it's pretty hard, okay, to mount a legal challenge. And I don't expect that one will get very far.  I understand the frustration. I understand the suspicions. But we have a Republican Director of Elections in St. Louis City named Scott Leiendecker.  Ed Martin and I both talked to Scott today, and he says there -- while he understands the reasons for some suspicion, he personally had his hands on the whole thing and there's no reason for us to disbelieve the numbers.

Hear the whole convo at Fired Up Missouri.