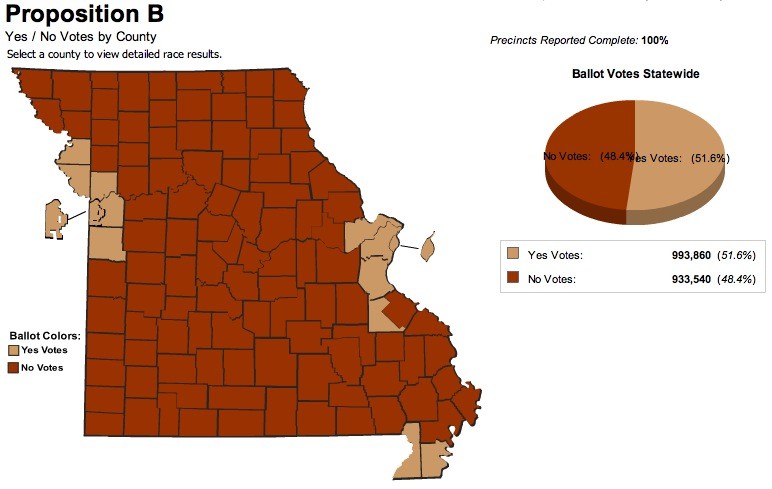 Though victory was eventually grasped, the Yes! on Prop B campaign and various hangers-on had a tense night at their election party at the Humane Society of Missouri in St. Louis. Click behind the jump for a timeline of the night and some pictures of puppies.
Red, blue and clear balloons are scattered around the lecture hall in the Humane Society of Missouri's lecture hall, and about 60 people mill around, most rocking some kind of pro-puppy regalia: orange ASPCA wristbands, big yellow pins emblazoned with a puppy's face and Humane Society gear. We even spy a woman with a Yes! on Prop B bumper sticker in the small of her back -- and a crumpled dalmatian costume heaped in a corner. (Anton Chekhov said that if you introduce a gun in the first act, you have to fire it by the third act. In this case, the dalmatian suit is the gun. Watch out.)
Three news networks broadcast with the sound muted on the flanks of the stage, and another wall is dominated by a projection of the Secretary of State's election-tracking site, automatically refreshing with the latest results every two minutes.

A little after 8 p.m., the results look like this:

​Wayne Pacelle, president and CEO of Humane Society of the United States, takes the stage, looking grim. From the beginning, what was surely meant to be an optimistic pep talk sounds like a concession speech.
"Only one to two percent of propositions make it to the ballot, and nationally, only 37 percent are voted in," he says. (That translates to, at least we tried.)
"Missouri is a state that has lagged in animal rights. It was twelve years ago that we heard the same nonsense we've heard this time, that these new laws would lead to an end of agriculture."
"People get confused, and confused voters vote no," Pacelle says. "People want to see something done about puppy mills, but they get confused."
As he speaks, the KSDK newscast projected behind his head shows a massive graphic, with only 39 percent of votes in favor of Prop B, 61 percent against. 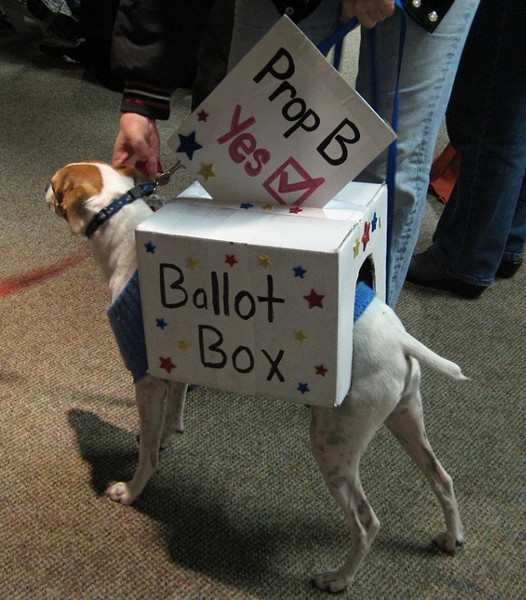 ​8:49 No significant change in the polls, and things are still looking grim, but then, a spark of joy in the darkness! Two little sweater-wearing dogs are led in, rocking red and blue harness leashes. One of them wears a little ballot box on its back, with a big "yes" vote for Prop B sticking out of the top.

A photographer wandering around the party crouches down to snap a picture of the frantic dogs, who, on orders to sit, accidentally bucks off the ballot box. Hilarity ensues.
"This is what my life is reduced to," the photographer says. "Twenty years in this business, and this is what I'm reduced to. C'mere, boy!"
9:15 p.m., 26.8 percent of votes reported.
Yes: 36.9 percent
No: 63.1 percent
Jeane Jae, vice president of communications for the Humane Society of Missouri, looks worried as she bustles around the room.
"I'm glad that it's finally come to it, that the day is finally here," she says. "I think Missourians understand that puppies need to be protected. I'm still confident that we can win."
10:30 p.m. 54.6 percent of votes reported
Yes: 40.6 percent
No: 59.4 percent
Votes from Kansas City start roll in.
Overheard: "Kansas City is going to be maybe 75 to 25 in favor. It's still not gonna be enough."
The party has thinned out a little. People are quietly eating cold pizza and moodily grabbing Halloween candy.
"Hope springs eternal," Jae says from her seat in a cluster of women on the edge of the room, all audibly wondering whether the as-yet-uncounted St. Louis City and St. Louis County votes will be enough to overtake the no votes.
A few minutes later, Pacelle is up on the stage again.
"I know it's been distressing to see such a big margin, but that margin is closing. Some of our biggest counties aren't in yet," he says. "We've got a real chance here."
Though he says it without a trace of a smile, the room is suddenly alive again. Cheers start up after his 30-second statement, and people pull out their cell phones, telling friends to come back, there's a chance.

​At 11:41 p.m., Pacelle hops onto the stage once more. The vote is still 51-49, but all the rural counties have been counted, and the numbers still coming in are from urban counties -- Yes! on Prop B's stronghold.
"We are officially declaring victory!" he shouts. The crowd responds with cheers and clapping. Some people burst into tears at the news of a victory that, a few hours ago, seemed an incredibly slim possibility. "Every vote mattered today."
Champagne begins popping, and a blonde woman dashes out of the room through the crowd.
A minute later, she re-enters in the dalmatian suit, fist-pumping and high-fiving and posing for the cameras.  (And there, folks, if your Chekhovian conclusion.)
Just before midnight, the multi-million dollar Yes! on Prop B campaign officially beats back its rural opponents. The campaigners take their final bow.