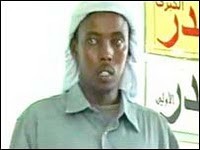 A man who immigrated to St. Louis from Somalia and worked as a driver for Express Airport Cab has been charged with funding a terrorist organization in his native country.

According to a federal indictment handed down last week, Mohamud Abdi Yusuf collected money in St. Louis that was secretly funneled to al-Shabaab, the Islamic militant group that's seeking to takeover the east African nation. In February of 2008 the U.S. State Department added al-Shabaab to its list of foreign terrorist organizations.

The indictment states that Yusuf and his associates first plotted to raise money for al-Shabaab in January 2008 and knew it had been declared a terrorist outfit when they began sending funds to the group in June of 2008. Yusuf allegedly funneled the payments to an intermediary in Kenya and Somalia by the name of Duwayne Mohamed Diriye.

Another Somali immigrant living in Minnesota, Abdi Mahdi Hussein, was the one who allegedly wired the money from Yusuf to Africa. The indictment further alleges that the suspects used coded language to discuss their transactions, referring to al-Shabaab (which translates to "The Youth") by nicknames such as skull-crushers, teeth grinders and sling-shot throwers.

For the most part, the funds Yusuf is accused of sending al-Shabaab were pretty meager -- three payments adding up to $4,500 that was to go toward purchasing a vehicle to transfer troops and supplies.