November 03, 2010 at 10:28 AM
comment
Sometimes, the morning after, it's difficult to tell just what an election signifies. This year, we find ourselves wondering if the American people like Republicans again. Or do they merely (for the moment) hate Democrats? And what about that Christine O'Donnell? 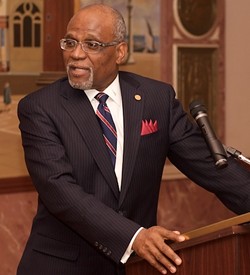 But there's one election result that seems clear to us, and that's this: The idea of merging the city of St. Louis with St. Louis County will survive to see further discussion.

Back when he must have felt invincible, County Executive Charlie Dooley stated his public support for a merger. Dooley's challenger, Republican Bill Corrigan, immediately made his opposition to any such merger Exhibit A in his case against Dooley.


But while Corrigan's challenge proved surprisingly tough -- he raised an impressive $1.5 million, about $1 million less than Dooley -- he couldn't pull off a win.

Dooley won by an estimated 4 percent of the vote, according to KWMU.

Had Corrigan won, the merger talks would almost certainly have been dead. But Dooley's victory, while hardly a mandate, should signify to other politicians that they can support a merger and still keep their jobs. And with St. Louis Mayor Francis Slay on the record with his support for a merger, too, well -- let's just say that we don't want to get ahead of ourselves, but we could actually see this idea going somewhere.