Rehashing Mizzou's Loss to Nebraska, a.k.a. Attempting to Find New Meaning in Life 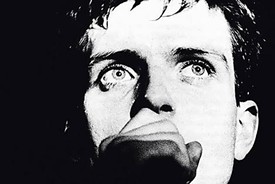 I'm pretty bummed about Mizzou getting knocked off by Nebraska Saturday. I've been showering in the dark, listening to my Joy Division records and weeping. A lot. I think my cats are beginning to grow weary of my despondency; I caught them this morning muttering together in the corner and gesturing toward my stack of empty Hungry and Lonely Man dinners. (From the makers of Chef Cutter's Bland 'n Listless Soup For One! Available only at gas stations between the hours of two and four a.m.!) Stupid uppity cats can go to hell. If God hadn't wanted us to drink at nine in the morning he wouldn't have made strip clubs open 24 hours a day.
So anyhow, things haven't been great. I hope you're dealing with it in whatever way gets you through the day. Just remember, family and friends are never, ever the answer.
You know what might help, though? Perhaps if we could figure out what happened, there might be some closure. Or just further flagellation. Eh. Either way.
When I wrote up my preview for the game last week, I summed up the keys to a Missouri victory thusly:

"As I'm sure you've gathered by now, the single most important aspect of this game will be how well the Tigers can limit the running yards Taylor Martinez and the rest of the Nebraska backfield pick up. If Martinez stays bottled up on one side of the line of scrimmage, Missouri should be able to limit the amount of damage the 'Huskers can do to them. If they can't keep him contained, and the Nebraska offense opens up daylight for guys to run through all day long, well, at least we won't have to worry any more about the top five teams losing."

Okay. So I have good news, and I have bad news. Let's start with the good, shall we? Keep things positive for the moment. The Tigers did not let Taylor Martinez beat them. They bottled the Nebraska quarterback up more effectively than any other team has yet done, holding him to just 16 yards on 12 carries. He also didn't get much of anything done through the air, completing 6 of 9 passes for 115 yards. So, yes, Mizzou did an outstanding job of silencing Taylor Martinez. Of course, that might have had something to do with the fact that Martinez didn't even play in the second half after Kenji Jackson flattened him. Still, even while he was in the game he didn't get much done.
Now for the bad news. I think maybe the Tigers forgot that little bit about "...and the rest of the Nebraska backfield...", because they didn't do such a great job stopping the rest of the Cornhusker rushing attack. Roy Helu Jr. ran for 307 yards, averaging 11.0 yards per carry. That's a pretty good average for a receiver, much less a guy taking handoffs all day.

​The culprit, sadly, was largely the same Tiger front four who did such a remarkable job against Oklahoma the week before. All day long they were beaten by the Nebraska offensive line, with gaps opening on play after play.
Actually, it probably isn't fair for me to lay the blame on Mizzou's defensive line. The rest of the Tiger defense had a hand in letting Helu set the all-time Nebraska single-game rushing record. The linebackers didn't tackle him. The safeties didn't tackle him. When a player has three rushing touchdowns longer than 50 yards, there are plenty of tackles not being made, and plenty of blame to go around on the defense.
Missouri's offense wasn't really that much better. Nebraska went to a three-man front for the first time this season and ran over the Tiger offensive line much the same way Roy Helu ran over the defense. Blaine Gabbert was sacked six times and hurried countless others, ending the day just 18 of 42 passing. How an O-line which did such remarkable work outplaying Oklahoma's defensive front could look so helpless to either stop the pass rush or create some running room is kind of a mystery, to be honest.
To their credit, the Tigers played better in the second half, but the hole was already much too deep for them to come back. One week after they played their best game of the season and moved into serious national title contention, Mizzou went out and played their absolute worst half of football of the year and lost it all.
And that, of course, is what stings the most. It's going to be another season with no new hardware for the trophy case in Columbia, unfortunately. Nebraska doesn't have another serious challenge on their schedule until the Big XII title game (they do travel to Texas A&M, which could qualify as a trap game, certainly, but I don't see the Aggies winning that game), and they now own the tiebreaker over Missouri. It's fairly likely neither team will lose another game this season, but Mizzou will still be shit out of luck in the Big XII North. There should still be a decent bowl, maybe even a BCS bowl, but nothing is guaranteed at this point.
Things looked so bright just last week, and Michigan State even went out of their way to help the Tigers out. They lost to Iowa on Saturday, falling out of the top five, number one Auburn still has to play Alabama, and TCU faces an extremely tough challenge against Utah. If the Tigers had won there was every reason to believe they could sneak up into the top three by the end of the season with just a little luck. Now, nothing.
I suppose, though, you could call that a silver lining if you wanted to. The mere fact that it isn't completely absurd to be upset that the Tigers are going to finish out of the top five should say something about how far this team has come from the bad old days when just winning enough games to qualify for a bowl was cause for celebration.
Still, it's hard to feel happy about that right now, with the Tigers having gone from contender back to pretender in the space of one poorly played half of football.