Rex Sinquefield Registers His Bentley and His Vote in Osage County 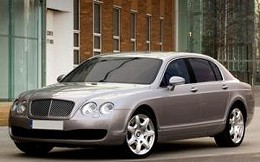 The man who's poured millions of dollars of his own money into an effort to change the tax structure in St. Louis is not registered to vote in St. Louis, even though he owns a $1.7 million mansion inside city limits.

Instead, Sinquefield casts his vote in Osage County in central Missouri, where he owns an 8,100-square-foot mansion and some 580 acres of land. Maintaining his permanent address in Osage County also allows Sinquefield to save thousands of dollars each year on personal property taxes for his fleet of automobiles, boats and ATVs.

That's right. The 2008 Bentley Continental Flying Spur in which Sinquefield is often seen cruising the streets of St. Louis is registered in Osage County. The car -- which sells new for around $170,000 -- would likely cost about $3,000 in annual personal property taxes in St. Louis based on the assessed value (generally one-third of market value) of the vehicle. By registering the car in Osage County, Sinquefield pays less than half that.

In 2009, Sinquefield registered 13 automobiles, three boats and several boat trailers to his home in Osage County. The total assessed value of those vehicles -- which included a BMW x5, Jaguar XK8 and several Jeeps and pickup trucks -- added up to $105,721 and cost Sinquefield $3,550 in personal property taxes, according to the Osage County Department of Revenue. Had that same property been registered in St. Louis, Sinquefield would've paid $6,834 in personal property taxes based on the '09 tax rate of 6.65 percent.

A spokeswoman for Sinquefield did not return calls for comment. In a 2007 profile in the Post-Dispatch, Sinquefield stated that he planned to spend half his time living in St. Louis and the other half spent in Osage County.

Sinquefield isn't breaking any laws by registering all his personal property in Osage County.

The state statute is fairly vague as to what defines a person's permanent residence when it comes to personal property, allowing Sinquefield to register all his vehicles in Osage County. Moreover, since his country manse abuts the Osage River, he's well within his right to register his boats there.

Sinquefield hopes that tomorrow a majority of Missouri voters will back his Proposition A, which would force St. Louis' earning tax to withstand a city-wide vote. But whether Prop A succeeds, Sinquefield can take comfort in knowing that he's successfully avoided one burdensome city tax: personal property.

Here's a list of Sinquefield's declared personal property for 2010. The Osage Department of Revenue assesses the value of the list at $84,830.