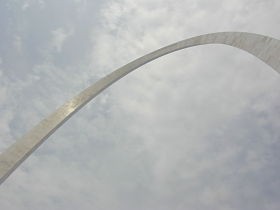 Honestly, why do we continue to pay attention when the Daily Beast decides to rank the nation's cities when all they ever do is make us feel bad about ourselves? St. Louis is a splendid place. And we are willing to bet that none of these rankers has ever bothered to visit. Are we supposed to get excited when they deign to cast a yawn in our direction when the pilot on their transcontinental flight announces that they are flying over St. Louis and are, therefore, nearly halfway to L.A.?

Their constant judgment irks us. And yet we continue to post their "findings" on this here blog because, um, well, it's a slow news day here. So here we go. For the second year in a row, the Beast has ranked the intelligence of America's cities and St. Louis has slipped from a not-so-impressive 24th to an even less impressive 32nd.

In Daily Beast terms, this means we're a little dumber than Los Angeles, but still a little brighter than Birmingham.

What's worse is that our cross-state rival Kansas City, which we so often dismiss as a cow town, appears to be getting smarter. Last year, it ranked 17th. This year, it moved up to 12th.

This year's smartest city is Boston. The dumbest is Las Vegas.

As always, the Beast's justifications for its rankings are vague. Or maybe we're just too dumb to figure them out. Something to do with bachelor's and graduate degrees per capita and nonfiction book sales and number of libraries and universities. Blah blah blah.

Here is the citation in full: