October 26, 2010 at 12:09 PM
comment
A Jefferson County Circuit Court judge erred when he threw out a lawsuit filed by gadflies in Crystal City, the Missouri Court of Appeals said in an opinion released today. 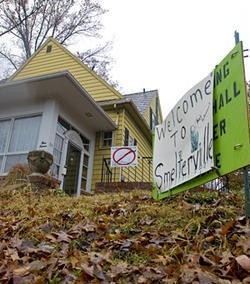 The gadflies -- who call themselves the Concerned Citizens of Crystal City -- sued their city in 2007 over a development deal that they believed violated the law. (Wings Enterprises wanted to redevelop a shuttered factory as an iron smelter. See our story here for background.)

But the developer, Wings Enterprises, intervened in the suit and, during the discovery process, began demanding that the gadflies turn over reams of documentation identifying commenters on an anti-smelter website they controlled.

Wings sought the email and IP addresses behind as many as 10,000 anonymous comments.

When the gadflies resisted, saying the request was overbroad and designed to harass them, Jefferson County Circuit Court Judge Benjamin F. Lewis sided with Wings. He imposed sanctions against the gadflies, denied their requests for legal fees and dismissed their lawsuit against the city in its entirety.

Reached by phone today, William "Jack" Ginnever, a member of the Concerned Citizens' group and the website's proprietor, said he'd just heard the news from his attorney. "I'm still trying to comprehend it," he said.

The appellate court ruling, issued by a three-judge panel in the court's eastern district, disagreed with the gadflies' contention that the court abused its discretion by not punishing Crystal City for alleged violations of the discovery process.

But it's otherwise a big victory for the Concerned Citizens' group.

The appeals court opinion notes that Ginnever produced the content of all the postings on the website, answered 75 interrogatories and ultimately produced more than 6,000 pages of documents. Meanwhile, the court found no record that Wings' lawyers had made "any attempt ... to restrict their broad request for information ..."

As the opinion continues:

"Wings' request for production of information relating to the identity of those posting comments to the [website] Forum is overbroad. To sanction Ginnever and the other Plaintiffs by dismissing all of their claims for failing to respond to such an overbroad discovery request is unjust and an abuse of the trial court's discretion."

The suit will return to Jefferson County, where the appellate judges suggest that Wings and its lawyers may issue a "properly narrowed request for production."

"This court does not address the merits of Plaintiffs arguments concerning First Amendment protection for the anonymity of those posting comments to a website, as we do not need to reach that issue," the opinion says.

The St. Louis Post-Dispatch and the Missouri Press Association had previously attempted to file an amicus brief in the appellate court case, saying that the rights of commenters to speak anonymously on newspaper websites was also in question. The appellate court had denied that request.

The fight that's almost sure to continue on the Circuit Court level may be why Ginnever wasn't declaring total victory this morning. (He also noted that the city is trying to come after the plaintiffs for its legal fees, which now total $440,000.)

"I'm temporarily relieved," he said. "But I do think there's still going to be some biting and scratching in the future."