The Tigers Finally Get Over That Hump

The Missouri Tigers finally beat their own personal bugaboo, the Oklahoma Sooners, on Saturday. Even better, they won like a real football team.
Now, lest that second statement come across as horribly condescending, let me explain. In years past, the Missouri teams which have come so close to greatness have done so based on some sort of bizarre video game offensive system, or just one or two transcendent players, or something of the sort. Not that there's anything wrong with that; if you can get a Jeremy Maclin to return kickoffs for touchdowns half the time he touches the ball or a Brad Smith to gain 400+ yards a game, you certainly don't complain about having such a performer on your team. When your team's success is predicated on a single player going off on a weekly basis, or a system that no one has ever seen before, though, it's very much a house-of-cards situation.
This year, though, that isn't the case for the Tigers. And they showed it Saturday night.
The Tigers were able to beat Oklahoma because they were as good as Oklahoma, and they played even better. Missouri didn't need a gimmicky fastball offense to cover up deficiencies in their talent level; they played it straight. Oklahoma was the one running the gimmick offense, in fact. But at the line of scrimmage, play after play, the Tigers simply outplayed the Sooners. Blaine Gabbert was better than Landry Jones, despite the latter running the aforementioned gimmick offense all game long. It was shocking to realise, but at the end of the game Gabbert actually had more passing yards than Jones did. He also threw two fewer interceptions. (To be fair, Jones did have three touchdown passes to Gabbert's one, but I'm willing to credit that to the success Mizzou had running the ball, particularly in the red zone.)
Now, please don't think I mean disrespect when I say gimmick. I would never try to downplay what Chase Daniel or Maclin or Chase Coffman did at Mizzou. But the offensive systems you see so many college programs employ exist for one reason: they allow less talented teams to compete with more talented teams, based on their scheme being difficult to play against. There's no shame in it; if anything, it's a rather noble endeavor. But that gap in talent is still there, no matter how you slice it. 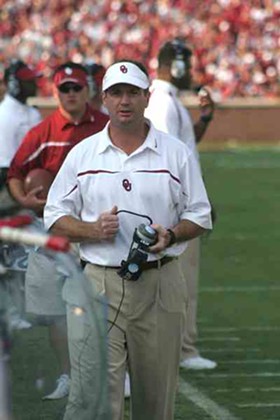 ​Missouri ran the ball more effectively than they have at any other point in the season, showing a commitment to the ground game which has been sorely lacking at times for the Tigers. The running backs were partially responsible for that, of course, but the real credit has to go to the Mizzou offensive line. In fact, the O-line may have been the story of the game.
The line play for the Tigers was the real difference between this and every other Tiger team we've seen over the past few years. Sure, there were times when it seemed like Chase Daniel had all day to throw, and he did, but against the big-time opponents (read: Texas and Oklahoma), the O-line simply couldn't get the job done. Daniel would be under fire the whole day, rushed constantly, and the Tigers' system would break down. Not this year. The Tiger offensive line was unreal, protecting Gabbert all day long against the Oklahoma pass rush and opening up running lanes.
Not to be outdone, the Missouri defensive line was just as good as the offensive line, pressuring Jones in spite of the frenetic pace of the Sooner offense. I was a little winded just watching the game, but the pace didn't seem to faze the Tiger defense. If you're looking for a narrative as to why this Tiger team has a shot at the top when previous rosters did not, the name you want is Dave Steckel, the defensive coordinator. He took over after the 2008 season, and I would say that may be the single most important event for the program in the last few years. Instead of a soft defense allowing teams to run all over them and hoping to get the occasional turnover to allow the offense a free shot, this defense is fast, this defense is strong, and this defense imposed their will at the line of scrimmage.
Oh, and Aldon Smith nearly ran an interception back for a touchdown on a broken leg. So there's that.
And that was really the story of this game. The Tigers won it in the trenches, where both their offensive and defensive lines consistently won the battle at the point of attack. That's why they didn't need the gimmicky offense or a single gamebreaking performance. (Well, Gahn McGaffie's kickoff return to open up the game certainly didn't hurt, but still.) They were just as good as the number one team in the land on both sides of the ball, top to bottom. This wasn't a win by the system; this was a win by the players. It was a win for recruitment. You know, just like a real football team. Hmm. It still sounds pretty bad, doesn't it? Oh well.
So congratulations Gary Pinkel. I always believed you were a good coach, but I don't know I ever believed you would get so close to the very top of the pile. Congratulations to the rest of the coaching staff as well, and every single player on the roster. You all earned every bit of that number six ranking. (And that No. 1 ranking two of the six BCS computer programs spit out.) I would say I hope you all got laid after the game, but let's face it: We all know you totally did.
The Tigers now have a trip to Nebraska to look forward to, as they try to beat a ranked opponent on the road for the first time this season. Oh, and they can also look forward to seeing Sam Bradford wearing a Missouri jersey this week. I know I am.