Haunted Boy Premiere Brings Out a Crowd; Second Showing This Week at Tivoli 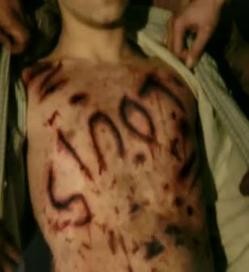 Several hundred moviegoers showed up Thursday night at the Tivoli Theatre for the world premiere of Haunted Boy, a documentary on the real-life exorcism that inspired the book and film The Exorcist.

As most St. Louisans know, the story began in a suburb of Washington, D.C., when a 13-year-old boy supposedly became possessed by demons. The boy was later sent to St. Louis where Jesuit priests with Saint Louis University purportedly healed the victim through the rituals of the exorcism.

Haunted Boy is an incredibly spirited account of that 1949 exorcism that's bound to register with believers in the paranormal. That said, those more interested in a historical and chronological telling of the boy's alleged possession may leave the film with their heads spinning, à la Linda Blair. There's a lot going on in these 88 minutes of celluloid.

Sibling filmmakers Chris and Philip Booth of Los Angeles have acquired what they say is an unabridged version of the diary kept by the priests who performed the exorcism. Using that document as a jumping off point, the Booths team up with paranormal investigators to visit some of the old St. Louis haunts (literal or figurative, depending on your viewpoint) where the boy stayed during his time here.

The Booths and their ghost-hunting entourage journey to the creepy, old St. Vincent's Asylum in the suburb of Normandy (now a low-income apartment) where it's believed the boy underwent treatment in the building's now sealed-off fifth floor. Is that cloudy image the filmmakers capture on their thermal-imaging cameras one of the demons cast from the boy? Or is it merely the wind blowing through a drafty window?

A similar scene unfolds in the bedroom of a home in Bel-Nor where the boy is believed to have stayed for most his time in St. Louis. The Booths and their crew feel a strange heat emanating from the room as the voice of a spirit barks at them through a computer portal to get the "fuck" out.

Interviews in the film with demonologists, professed exorcists, relatives of the priests involved in the exorcism, a bizarre recovering schizophrenic and many others (including this author, who penned a story about the Bel-Nor home) help provide some context and back story to this extraordinary tale.

Still, is it enough to determine whether the "Haunted Boy" was actually that -- haunted? Moreover, do the demons that possessed the child still linger in the brick and mortar of St. Louis?

The Booths seem to believe the answers to those questions is yes, and perhaps that's what continues to make the St. Louis exorcism such a great ghost story. It leaves a lot to the imagination.

The movie, which sold out last week, plays again this Thursday at the Tivoli (tickets available here) and is scheduled for release early next year on the SciFy Network. Check out the trailer below...