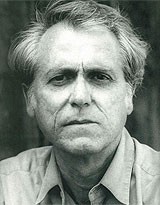 Don DeLillo hearkened back to his days as a student at Fordham University in New York City as he accepted St. Louis University's annual Literary Award late Thursday afternoon. It was at Fordham, said the 73-year-old novelist, that he learned an important lesson: "There's no escape from the Jesuits."
DeLillo, whose fourteen novels, including White Noise, Libra, Underworld and, most recently, Point Omega, have made him one of the most acclaimed and most influential post-World War II American writers, said it was remarkable to be included among the award's recipients, several of whom were authors he devoured when he was a "hungry young reader."
DeLillo fans, many clutching hardback first-editions and well-thumbed paperbacks of his novels, began gathering outside the auditorium at SLU's Cook Hall well before the author was scheduled to sign books at 4:30 p.m.
An hour later, upwards of 200 people gathered in the auditorium for the award ceremony, most of which was devoted to a "conversation" between DeLillo and SLU English professor Harold Bush. This conversation consisted of broad questions from Bush about his work that DeLillo, who grew up in the Bronx and whose accent and speech patterns often call to mind a calmer Christopher Walken, answered at length.
Those answers were packed with gems not only for DeLillo obsessives but also students of literature in general and would-be writers. DeLillo said that his first task as a writer is to make "beautiful sentences." His novels develop organically from these sentences. He makes notes as he writes but never outlines a plot. Instead, he works until the novel's structure becomes clear to him. Later, in response to an audience question, he admitted that while he doesn't feel "happy" when a novel is finished, only satisfied.
As Bush noted, DeLillo's best known work is likely White Noise, in which a college professor and his family are forced from their home by an "airborne toxic event." DeLillo said he was inspired to write the novel after returning to America after three years in Athens, Greece, and being overwhelmed by the brightness and splendor of American supermarkets.
Meanwhile, his novel Mao II, in which a reclusive novelist is gradually drawn into the world of global terrorism, arose from two photographs: one of a mass Moonie wedding, the other of an enraged J.D. Salinger, who had been tracked to his New England hideaway by New York Post photographers.
DeLillo himself has earned a reputation as a "reclusive" novelist. He did his best to dispel that impression, noting that for the first half of his career very few people wanted to talk to him. If he has made more appearance in recent years, it's largely because changes in how books are published and marketed demand it.
In a few instances, he played the part of the beleaguered artist to comic effect. When Bush brought up the subject of terrorism in Mao II and his 9/11 novel Falling Man, DeLillo asked, deadpan, "Is it time for dinner?" In response to Bush's final question -- what question are you never asked at these sorts of events that you wish you were -- DeLillo answered, simply, "'Are we finished yet?'"