With North County Out of the Running, St. Louis Casino Opponents Target Chain of Rocks Proposal 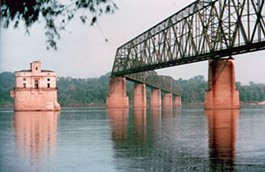 Earlier this week, the chairman of the Missouri Gaming Commission, Jim Mathewson, ruled that North County Development LLC -- the group hoping to build a sprawling casino and resort near the Columbia Bottom Conservation Area in Spanish Lake -- would not be given additional time to gather investors and bolster its pitch for the state's thirteenth gaming license.

"They're out, and I think they clearly understand that," Mathewson told the Post-Dispatch. "They pulled out. We had a timeline."

For the many opponents of the proposed casino, the news was met with both celebration and skepticism.

"It will be over when it's over, but it's not over right now," Dora Gianoulakis, president of the Spanish Lake Community Association and a leader of the Common Sense Coalition, tells Daily RFT. "But this is very, very nice. At least as of this moment, it doesn't look like it's going to happen."

But while the conservation area proposal has seemingly hit a dead end, there are still developers hoping to build a $131 million casino near the Chain of Rocks Bridge. This weekend, concerned citizens will gather at the bridge for a show of solidarity they hope will dissuade the gaming commission from bringing a fifth casino to the St. Louis area.

With victory seemingly in hand, Gianoulakis and other opponents of the conservation area casino are shifting their focus to the Chain of Rocks site, citing similar environmental and economic concerns. On Saturday at 2 p.m., they plan to meet at the foot of the bridge and pose for a group photo, which they'll send to the gaming commission.

"One set of developers hasn't found financing, so maybe the bankers think the market is saturated," Gianoulakis says. "That's one of the arguments we've been using since the beginning -- not the only one but one of them."

The Koman family -- the same folks who own and operate the Casino Queen in East St. Louis -- is behind the Chain of Rocks proposal. In August, they told the Post that the project would be a boon for north St. Louis. They want to build a 120,000 square foot complex along Riverview Drive and claim the casino and hotel could create 625 permanent jobs and generate $29.7 million in state tax revenue and $9.4 million for the city.

Opponents say the location -- a former landfill 80 feet above the Mississippi River -- poses a  threat to the surrounding floodplains and the migratory bird flyway at the confluence of the Missouri and Mississippi.

Gianoulakis also notes that the ruling earlier this week is not the final nail in the coffin for the north-county casino. The property has been rezoned for commercial use by St. Louis County and there is a still a chance the gaming commission could choose not to issue a thirteenth gaming license, allowing developers additional time to gather investors and resubmit a proposal in the coming years.

"We'd love to see the license go to Cape [Girardeau] or Sugar Creek [in Kansas City,]" she says. "But these people up in Jeff City might say next year 'Hey, we need money, let's issue a 14th license.' This doesn't go away."