Adam Levin Talks About The Instructions 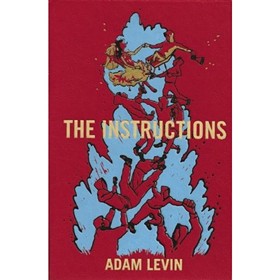 The Instructions is the best 1,030-page book about a super-brilliant, super-violent ten-year-old with Messianic tendencies that you're going to read this year. (It doesn't matter that there probably aren't that many others.)

This first novel by Adam Levin has been touted as the literary love child of Philip Roth and David Foster Wallace. You can hear it for yourself this Saturday at 5:30 p.m. when Levin gives a reading at The Royale. (No, Levin will not be participating in the step-dancing afterwards.) The event is jointly sponsored by Subterranean and Pudd'nhead Books; the proprietors of both stores consider The Instructions the best book they've read all year, and that includes Freedom. Daily RFT called up Levin in Chicago for a phone chat about the book.

(And hell, we might as well admit that The Instructions is of special interest to this blogger because it's set at Aptakisic Junior High, an actual school in our shared hometown, which Levin attended for a year and a half, though not in the division for kids with disciplinary issues known as The Cage. That is fiction.)

Daily RFT: So this story about the ten-year-old Messiah Gurion ben Judah Maccabee is clearly autobiographical.

Adam Levin: Right. It's absolutely about how smart I was. No, actually, I started off chasing this one voice of a very different type of kid. For a few hours or days, I wrote that, and then I started to write more about a kid I wanted to be, the kid I wished I was: the smartest, the strongest, the potential Messiah.

Did you set out to write a thousand pages about this kid?

I had no plan when I started writing. It developed in such a way, and the I wrote till I was done. About four years in, I saw that it was not a 300-page book. It was 600 pages then -- 300 of which I ended up cutting -- and I thought, well, let it roll, let's go with this. I could have cut stuff that should have been in it and made it a small book, or I could do the hard thing and commit to what I wanted to do.

Four years in? How long did it take?

Nine years. In the middle of that, my back gave out. I wrote for two years standing up. It was a nightmare of being a writer, like someone was punishing me.

In the first scene of the book, Gurion and two of his friends waterboard each other to discover the boundary between life and death. It's interesting how philosophical they are about violence.

Originally, I started the book in the scene after that, when they're fighting in the locker room. His intelligence got established later in the book. Then I thought, he needs to be doing the "I'm smart" thing from the beginning. The waterboarding thing, that was the way in. The first scene was the last scene that got written. I wanted to have the three guys rather than the lone wolf.

Well, he is the Messiah. Doesn't he need followers?

I don't think Gurion's necessarily right as a human being. If I had a son, I don't want my son to do that. He's like an American president, very charming but not necessarily a good person.

His parents love him.

His parents are the best parents ever. The mom takes him seriously as a force. The dad doesn't take him seriously enough. But they love the hell out of him. It's a little bit of a problem.

Early on in the book, Gurion teaches his disciples how to make penny guns. Is this something you invented?

I absolutely didn't invent it. This other kid I knew did. But I had them. My sisters were scared of me. My group of friends made weapons. There are all sorts of weapons you can make. I made a mace with shoelaces and with a penny duct-taped to the end. The penny gun is something you use to snipe at people and mess them up. It hurts to get hit.

How are you handling the Philip Roth and David Foster Wallace comparisons?

I love Philip Roth and David Foster Wallace. I'm really uncomfortable with the comparison. They're two of my literary heroes. It's exciting, but it makes me nervous. I've been told this thing I most want to believe, and then what if someone tells me it's not true?

Why should people in this very Catholic city come out to hear you read?

Well, there's that St. Louis-Chicago rivalry. They should come to check out the enemy. I did not write this book for a Jewish audience. I wrote it for an American audience. My first reader was raised by Episcopalian pastors. He read the first 30 pages and was totally with it. I thought, well, pastors, he knows the Old Testament, there's some Jewiness to him. But when I got more feedback from people who weren't Jewish, they said they could relate, even though they didn't know what certain Yiddish words meant. The Messiah people are claiming Gurion is is the same Messiah Christians are claiming Jesus was.

I will never write another 1000-page book. I have a short story collection coming out next year. [It's called Hot Pink.] Now I think I have to write the shortest possible novel. I also need to get a full-time job teaching. I'm officially on the job market. I'll go wherever they want to give me insurance and a livable wage.

McSweeney's has put out The Instructions with three different color covers. What's your favorite?

My favorite fluctuates rapidly. Whatever the last person told me theirs was. Originally they sent me the red and the blue one. I didn't see the gray one for about three weeks, so that became like the Holy Grail. It's fun to think about this every day. It's a cool problem to have. Right now, I'd have to say gray. But they have two more colors coming out.