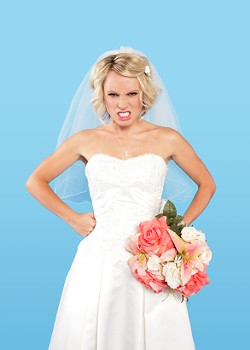 We're talking about a wedding (drumroll, please!) without pictures. A wedding where, even if the photographers show up and are snapping away, they never manage to produce a single photo to commemorate the event. Or, equally bad, a wedding where the photographer swears on the phone she's on her way, but never actually shows up.

That's exactly what's happened to a half-dozen St. Louis brides this spring and summer. The BBB tells Daily RFT that the brides contracted with Jennifer McConnell of Fotos 4 Life, a wedding photographer who advertised in Craigslist. McConnell took the money, and in some cases even sent photographers, but never actually produced the pics.

Kathleen Dorlac, a newlywed who lives in Florissant, tells Daily RFT that a friend who'd agreed to take photos for her wedding flaked six weeks before the big day. She found McConnell on Craigslist and enlisted her as a replacement.


On her wedding day, two photographers -- neither of them McConnell herself -- showed up. "They took tons of pictures," Dorlac recalls. "Everything was fine." But, a few weeks after the wedding, when Dorlac began calling McConnell to ask about the status of the promised online album, she got no response.

When Dorlac and some friends drove out to McConnell's stated address, a home in Ladonnia, Missouri, it was vacant. And when Dorlac reached another contact at Fotos 4 Life, a guy who claimed to be the general manager, he explained only that McConnell had failed to the pay the photogs snapping away at Dorlac's nuptials. "Once she pays them, you'll have your pictures," he promised. Then he, too, stopped returning Dorlac's calls.

Lisa Andrews-Kaminsky's experience was just as bad. She, too, responded to a Fotos 4 Life ad on Craigslist, signed a contract and paid a $250 deposit. She touched base with McConnell a few times before the big day, even warning to leave extra travel time since the wedding was out in Ste. Genevieve. "Give yourself twenty minutes to get lost on the wine country roads," she said. McConnell promised to do just that.

But on her wedding day in September, it was only one hour before the appointed 3:30 p.m. start time when Andrews-Kaminsky got a call from McConnell. She claimed to be running late -- "but I'll be there. Don't freak out!"

As the guests fidgeted an hour later, Andrews-Kaminsky started leaving frantic messages. She would never hear from McConnell again.

"The pastor got up there and said, 'Don't worry, nobody's got cold feet -- we're waiting on the photographer," the bride recalls. At 4 p.m., they finally gave up and went ahead with the ceremony. The only professional pics of the event would come from a photographer who just happened to be at the winery and agreed to do what she could to get a few shots.

Andrews-Kaminsky says she's disappointed, but she managed to put it in perspective. "I got to a point where I didn't care. I just wanted to get married to Jason." She's speaking out today to warn other brides.

As for Dorlac, she's still hoping that the freelancers who shot her wedding that day in May may hear about what happened and get in touch. She just wants the pictures. "I've kind of given up," she admits.

Ironically, Dorlac works in the Circuit Attorney's Office as a member of the support staff in the white collar crime unit. She agrees that the situation has given her new empathy for the victims she works with.

"It stings a little bit," she admits. "Of all the people in the world, I get screwed."