October 19, 2010 at 1:58 PM
comment
Police chief Rich Wooten calls it one of the most unusual incidents he's seen during his 26 years serving the St. Louis suburb of Ladue.

At 11:45 p.m. Saturday a homeowner in the 9700 block of Old Warson called Wooten's department to report a burglary. The man had just returned from an evening out to discover a thief fleeing from his home with jewelry and electronics.

"We did what we do," says Wooten. "We showed up with the lights and sirens." 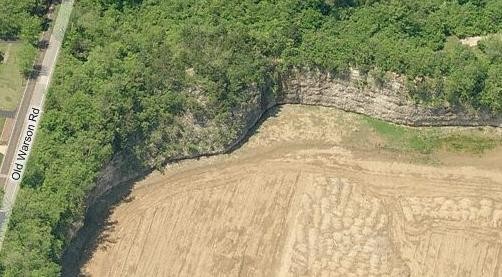 For the next couple hours police searched the nearby neighborhood, even employing a K-9 unit from nearby Maryland Heights to help track the intruder. Eventually, though, the cops gave up the search -- assuming the burglar had gotten away.

Flash forward some 30 hours later. Workers arriving to their Monday morning shift at the Rock Hill Quarries (located just a few hundred yards from Saturday's burglary) made a gruesome discovery.

Lying at the base of a 50 to 60 foot cliff in the bottom of the quarry lay the body of Donald Zakrzewski, a 42-year-old petty crook from south St. Louis. Found in his pockets and lying scattered nearby were items stolen from the home Saturday night.

"I don't know if he was running or walking," speculates Wooten. "But he had to scale a fence to get inside the quarry. Once inside there, it was dark, and he's was probably unfamiliar with the surroundings."

The old quarry is now used as a landfill. Wooten tells Daily RFT that Zakrzewski had no identification on him, forcing the police to rely on the medical examiner and St. Louis County Police to identify the body.

The Post-Dispatch reports that Zakrzewski, of the 200 block of Marceu near Carondelet Park, is something of a career criminal. Per the daily:

Court records show that Zakrzewski has a history of peace disturbance, marijuana possession and misdemeanor assault. In 1986, he was charged with burglary in St. Louis County. In that case, he pleaded guilty of receiving stolen property and was fined $500.

Just this summer, the St. Louis collector of revenue's office filed suit against Zakrzewski for failure to pay property taxes, as the city had done at least two years previously. He was due in court for the most recent case on Oct. 31.

All of those crimes happened in either St. Louis city or county, according to the Missouri Department of Corrections.