The Tigers of Missouri headed into College Station Saturday as 3-point underdogs, preparing to play in perhaps the most intimidating environment in all of college football. They left with a 6-0 record, their first since 2006, and a budding national awareness of just how good this current Tigers squad really is. They did allow an opponent to score for the first time in six quarters when Texas A&M kicked a field goal in the third, but only served to underscore just how ridiculously dominant the defense has been of late.
Also by the end of the weekend, Missouri had themselves a shiny new number eleven ranking in the first BCS standings of the year, which I have to admit makes me a little nervous. (It also proves just how idiotic the polling system is in college football, since Mizzou ranked no higher than 16th in any of the three major polls, largely because they were ranked lower by those polls to begin with, long before any actual football was played this season. Makes sense, right?) Having the Tigers ranked comfortably within the Top 25 seems pretty okay, like the Tigers are playing well and being recognised for it. Mizzou having a good team is fantastic. On the other hand, having Missouri ranked nearly in the Top 10 is scary, like something has gone horribly, horribly wrong in the collegiate landscape and the invisible hand of karmic retribution will be swooping in shortly to set things right.
Next week's showdown with Oklahoma is a long way away, though. For now, there's that absolute stomping of Texas A&M by the score of 30-9 to bask in.
The player of the game almost has to be Blaine Gabbert; his efficiency and accuracy in such a hostile environment were incredible. Gabbert is proving himself to be a worthy successor to Chase Daniel and the high-powered spread of recent years at Mizzou. Unfortunately, he's doing it with less offensive talent surrounding him than Daniel did; T.J. Moe and Wes Kemp are both extremely talented receivers, and Mike Egnew is proving himself a solid addition to the recent tradition of great Missouri tight ends, but the Tigers are severely lacking in the run game and the receiver corps isn't as deep as it has been. As good as Gabbert has been, the Mizzou offense doesn't have quite the oomph of those Chase Daniel/Chase Coffman/Jeremy Maclin teams.
On the other hand, the Texas A&M game was the perfect showcase for Missouri to show off aspect of this team that's much, much better than any other recent Mizzou team: the defense. I was afraid the Tiger defense would collapse after the loss of Sean Weatherspoon and William Moore to the NFL. Surprisingly, they didn't. Then came the injury earlier this season to Aldon Smith, the Tigers' most talented defensive player, and I thought they had to endure at least some fall off. Once again, though, I was wrong, and Mizzou is playing their best defense of not only this season but of the Gary Pinkel era period.
The top defensive star of the day has to go to Kevin Rutland, the senior defensive back out of Houston, Texas. Rutland was everywhere Saturday, shutting down every receiver he was asked to cover, nearly picking off a couple passes, and coming hard off the edge on several blitz packages. Rutland has stepped up his game in a big way this season, and it's made a huge difference in the Tigers' ability to limit their opponents' passing games. Honourable mention to Kip Edwards, number one on the field and in our hearts, who was only slightly less spectacular on Saturday than Rutland.
Possibly even more important than the job the D-backs did was the work up front by the Tigers' defensive line. Brad Madison, Jacquies Smith, and Michael Sam all played outstanding games, pressuring A&M's quarterback Jerrod Johnson all day long. Texas A&M came into Saturday's game with an offense that had been putting up big passing numbers pretty much all season, with Johnson averaging better than 300 yards per game. He still went over that number against Mizzou, but a huge chunk of that yardage (and the Aggies' one touchdown), was in garbage time, when the Tigers went into soft-sell mode.
Really the only negative you could take from Saturday's game for Missouri was, once again, the reminder of how much their running game lags behind the passing game. While Gabbert was moving the ball up and down the field, distributing it to every available target (one fan in the third row caught 3 passes for 26 yards), the running game continued to just sort of sputter along. Not bad, mind you, but certainly not anything to write home about, either. 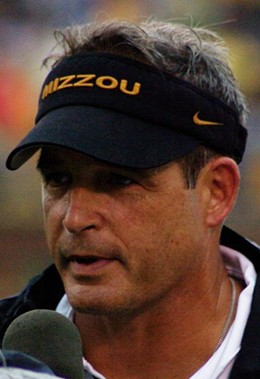 ​The spread offense is certainly known for huge passing numbers, of course, and that often seems to come at the expense of the ground game, but the fact is a truly dominant running back at Mizzou would make an enormous difference, and turn an already high-powered attack into an absolute juggernaut. Henry Josey, the true freshman out of Texas, looks to me like he could be a real star in the very near future, but he doesn't seem to get the touches he deserves. Kendial Lawrence looks good as well, but De'Vion Moore, the Tigers' #1 option on running plays, just hasn't shown much to convince me he should still be sitting at the top of the depth chart. I understand Josey is just a freshman, and Pinkel may be hesitant to put too much weight on his shoulders so early in his tenure, but he just seems to make things happen the other backs can't.
Regardless, this was perhaps the single most impressive win by a Tiger team during Gary Pinkel's time as head coach. Texas A&M certainly wasn't the best opponent they've ever beaten, and the margin of victory wasn't as large as some of the truly epic beatings they've laid on teams at times (the 58-0 romp over Colorado in 2008 comes to mind), but this may have been the most dominant the Tigers have ever looked. Texas A&M is a very good team, and Mizzou made them look like a Division III squad. Now, let's see if the Tigers can take that momentum (and that 11 next to their name), and apply it next week when big bad Oklahoma comes to town for homecoming.