The Health Benefits of Celebrity Journalism 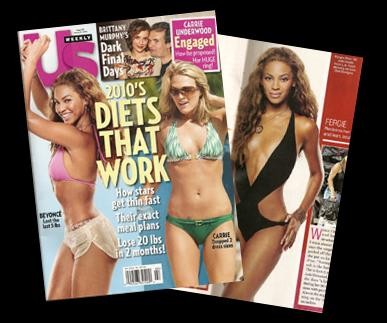 Fabulous news, celebrity magazine addicts: All those hours you've spent lolling around on the couch with bags of Chee-tohs and the latest copies of Us Weekly, In Touch and Life & Style aren't totally bad for you after all! It turns out that all the news of the travails of Lindsay Lohan, Paris Hilton and all the Kardashians makes you more aware of your own health issues.

Hinnant's earlier research had shown that when a person reads a conventional health news story, he or she will seek out the opinion of friends or family members before deciding to change a health behavior (or not). But with a celebrity story, readers don't feel as strong a need to have a discussion with a third party because Lindsay, Paris, et al, serve as such good object lessons of healthy (or non-healthy) behavior.

However, celebrity health news is more likely to resonate with readers who face similar issues, Hinnant said in a press release:

A story about a celebrity's postpartum health behavior will likely elicit stronger reactions from consumers with children than from those without. Similarly, a story about a celebrity experiencing addiction may stimulate a stronger response from consumers who have witnessed a similar circumstance. In these cases, the health messages likely have different effects on experienced consumers than non-experienced consumers.

So see? A tabloid addiction isn't such a bad thing after all.