Can it Be? National Book Award Thinks Freedom is Not the Greatest Novel of Our Time

It's a tragedy beyond words: The National Book Award nominees were announced today -- and Freedom is not among them!

Instead, the five nominees are Great House by Nicole Krauss, Parrot and Olivier in America by Peter Carey, So Much For That by Lionel Shriver, Lord of Misrule by Jaimy Gordon and I Hotel by Karen Tei Tamshita.

What can this possibly mean? Is the world suffering from Franzen fatigue? Does the National Book Award committee no longer take Franzen seriously as an Artist since he submitted docilely to the Oprah treatment? (They gave him the big prize in 2001 for The Corrections after he was banished from Oprah's couch.)

Is it simple prejudice against the book's (mostly) Minnesota setting? The nominees were announced by super-Southerner Pat Conroy and the home of that other super-Southerner Flannery O'Connor in Savannah, Georgia.

Did they want to avoid confusion with another book called Freedom by Orlando Patterson, which won the nonfiction prize in 1991?

Or is Freedom just not that good? (Perish the thought!) 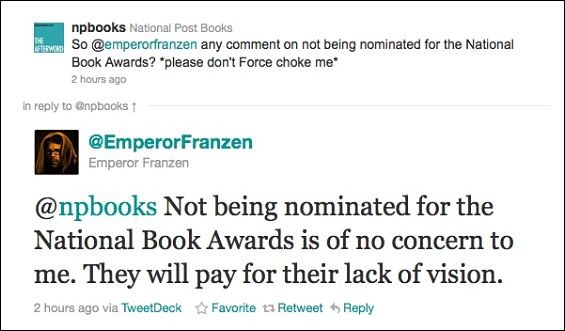 We have no doubt.