​I lucked out yesterday and managed to finagle myself a pair of tickets to the Blues game through a work acquaintance. Unfortunately, since it was a noon start (when did they start having hockey games in the middle of the day?), everyone I knew was working and unable to go with me. I briefly considered not going at all; going to a sporting event alone isn't nearly as uncomfortable an experience as going to a restaurant alone, but it's still one of those things which is much more enjoyable with company. In the end I decided I would go anyhow, and made my way down to Scottrade Center. I'm rather glad I did.
I watched the Blues completely dismantle the Anaheim Ducks by the score of 5-1. Now normally when a hockey game is 5-1 you could argue the score was deceptive, and the game was a lot closer than that. Couple soft goals, an empty-netter at the end, whatever. In this case, though, I would actually argue the score was a little deceptive as well, but in the other direction. Honestly, it wasn't even as close as 5-1.
The Blues have played two games this season, both wins, and in both games they've looked outstanding in one way or another. In the season opener against the defending Eastern Conference champion Philadelphia Flyers it was outstanding defense, a penalty kill that was almost too good to believe, and great goaltending from the Blues' shiny new netminder. Yesterday it was offensive explosion right off the bat that buried the Ducks deep enough they had no real chance of digging out. After that the defense took over again, stifling the Ducks' attack all afternoon. The result was the ass-kicking I referred to a moment ago.

​In the first game the Blues came out with outstanding energy and really controlled the first period. The Flyers were back on their heels, but the Blues just couldn't quite capitalize on the opportunity. It was much the same story in the second period. By the time the third rolled around the Blues looked a little winded, unsurprising given the excitement of opening night, the Brett Hull dedication, and the ferocious pace they set early, but they managed to hold off the Flyers long enough to make an overtime goal possible. Yesterday the Blues came out with that same intensity, but even better execution (and, it must be said, much less effective goaltending on the opposition side), and just blew Anaheim right off the ice.
What's been great to see in both games is that level of intensity. We saw good effort and intensity from the Blues under Andy Murray, who pushes discipline and smart play as hard as any coach in the NHL, but we also saw an odd sort of perfectionism, a tendency to outwork the opposition but not put them away because the right opportunity never seemed to come along. Under Davis Payne, the team seems energetic and aggressive, but looser as well. Perhaps it's just the maturation process of some of these players, and I'm reading too much into the coaching philosophy, but this bunch in 2010 so far looks much more willing to just rear back and fire the puck toward the goal rather than try to manufacture an eight-pass masterpiece every possession.
A couple observations from the first two games:
-- Jaroslav Halak looks like the real deal in goal. Well, obviously we already knew he was pretty much the real deal, seeing as how he led the Montreal Canadiens to an upset win over the Capitals in the playoffs last year, but he's looked even better so far than I expected. Particularly in the third period of the Philadelphia game Halak took quite a few shots on goal and handled them all beautifully. The only goal he allowed was one in which he was so 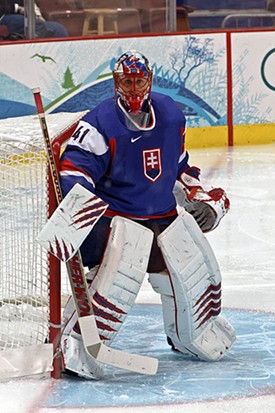 ​screened I'm not sure Patrick Roy would have had a chance to stop it. If Halak continues to play the way he has so far for the Blues (and the way he played most of the time in Montreal), I honestly don't care how good Lars Eller turns out to be. Bringing in Halak was a brilliant move. He's also remarkably polite; he thanked the fans and city and the team and the dude interviewing him at least three times in less than three minutes when doing the postgame interview Saturday night as the player of the game.
-- Helping Halak out, of course, has been an airtight defense. The Blues outshot the Ducks 53-14 yesterday, and that's not a typo. That's an awful lot of shots on goal for the Blues, of course, but that second number is really the amazing one. Holding any team, however bad their struggles on offense have been in the early going, to fourteen shots is just unbelievable. Eric Johnson has looked like a beast, and Alex Pietrangelo is starting to look more and more like the guy we all hoped he would turn into. Barrett Jackman looks energized, and both Carlo Colaiacovo and Roman Polak have brought outstanding intensity to the ice. Between the tremendous shotblocking work Saturday night, when the Blues' defense prevented the Flyers from getting even one shot on goal on a 5-on-3, and the suffocation job they did on the Ducks yesterday, I could not be more impressed with the Blues' defensive corps so far. Hell, I don't even have anything bad to say about Eric Brewer. Yet.
-- Speaking of Eric Johnson, I've been all kinds of excited to see him taking shots in the early going, but I still want to see more of it. He isn't Al MacInnis intimidating with the slapshot (nobody is), but Johnson has one of the bigger shots you're going to see out there at the moment. He should be cutting it loose not only as a scoring attempt but as a weapon of fear also. I'm not saying shoot it every single time you touch the puck on the offensive end, Eric, but I want the other team to at least be cognizant of the fact you just might shoot it every time you touch the puck on the offensive end. Force them to gameplan for it. A hole will open up somewhere else.
-- Alex Steen is really good. I'm not sure exactly when it happened, but he seems to be around the puck more often than anyone else on this team. What's odd is he doesn't have any one tool or trait that just jumps out at you, the way the playmaking ability of, say, a David Perron or an Andy MacDonald does, but somehow Steen touches the puck as much as any player on the roster.
-- In the game against Philadelphia there were times when I thought the Blues still fell into that trap of trying to make too many passes, get too fancy, and wait for the perfect shot to come along instead of forcing the issue. Particularly on the power play, there were at least three times I can think of right off the top of my head when they passed the puck one too many times and the play never materialized. Against Anaheim, on the other hand, the offense was extremely aggressive, attacking the goal and shooting much more effectively. That kind of constant pressure is only possible with a deep, skilled roster, and the Blues actually have such a roster. Let's just hope they take advantage of that and continue to pour on the pressure against any and all opponents.
-- I'm not a lifelong hockey fan, so I don't have the experience base of some others, I'm sure. However, that being said, I feel comfortable saying that seeing two goals scored six seconds apart was the greatest thing that has ever happened in the game of hockey, period.
Overall, it's tough to really find much not to like about the Blues' start to the season. They've won two games in a row at home, which is roughly half their total home wins from a season ago, and they've won each game in a different way. They played a grinding, tough game against a very good Philadelphia team, scraping together just enough offense to support an outstanding defensive effort, and then just blew a struggling Anaheim bunch right off the ice with a blitzkrieg attack. Their new goalie looks like a dynamite pickup, the young stud defenseman has looked like 2010 just might be his big breakout, and the offense is both extremely talented and remarkably deep. We'll see what happens when the Blues head out on the road for the first time this season, but the early returns look like they just might manage to avoid the slow starts which have plagued them in recent years.