Franzen Frenzy: Why Couldn't This Have Happened Here?

Catastrophe befell Jonathan Franzen this afternoon at the launch party for Freedom (aka The Greatest Novel Of Our Time) in London: 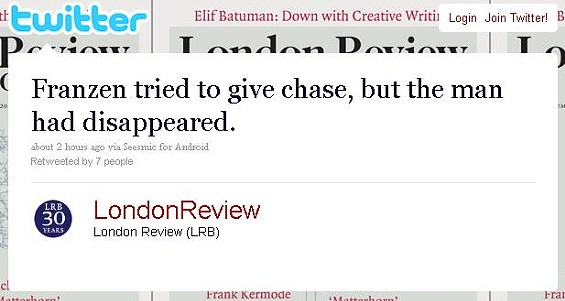 The thief escaped by jumping into the Serpentine in Hyde Park (where, incidentally, Percy Shelley's first wife drowned herself). He or she left a ransom note which read, "$100,000 Your glasses are yours again!" Writes a reporter/witness from British GQ: "Franzen apparently has minus-eight vision so GQ can only suggest someone convert the ransom note to braille."

With vision that bad, it's amazing he was able to survive giving chase without injuring himself.

A helicopter is allegedly searching Hyde Park for the thief. But there's no telling how much the famous specs could fetch on the black market.

England has not been especially kind to Franzen: Last week, his British publisher accidentally printed the uncorrected version of Freedom and 100,000 copies had to be pulped.