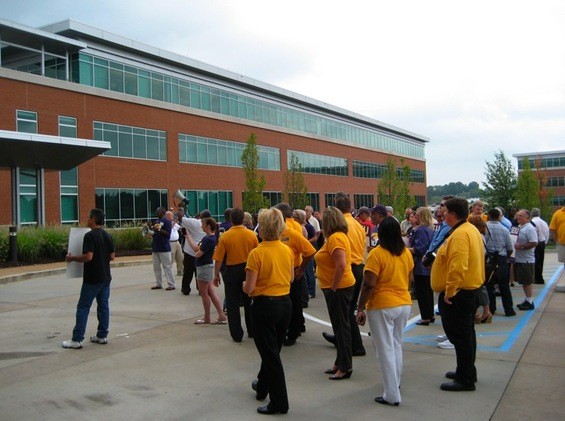 Approximately 30 pissed-off Express Scripts, Inc. workers from Bensalem, Penn. are headed to our nation's capital to voice their complaints about their treatment at the hands of the St. Louis-based corporation. The same busload of workers road-tripped to the company's UMSL headquarters in late August and rallied outside with the support of the SEIU.

According to the SEIU press release, Express Scripts, Inc. plans to close the Bensalem facilities, where 950 people work, on October 15. The delegation will meet with staffers from the House Health and Education Committee and the Senate Health, Education, Labor and Pensions Committee tomorrow afternoon. They also say that representatives from the White House and the Department of Defense, one of the company's major contracts, will be present.
"We think our leaders in Washington need to know this highly-profitable company wants to freeze the pay and cut the health care benefits of these workers," said Stephanie Haynes, a vice president of SEIU Healthcare Pennsylvania, in a press release announcing the event.
"While the White House and Congress are working to create jobs and put people back to work, ESI wants to either downgrade jobs, or destroy them altogether. This kind of corporate behavior only digs us deeper into the economic ditch."
Update: Thom Gross, senior manager of public affairs for Express Scripts, emails:

Express Scripts remains in negotiations with SEIU Local 1199P and has made no decision or any announcement to close any facilities.