Antarctic Sled Dogs (and Ponies) Finally Have Their Day

When Riverfront Times last checked in with Ronnie Smith, the Air Force colonel and poet was working on several projects relating to Antarctica, where he had served for twelve years. (See "Poetry in a Cold Climate", January 20.) Among them was a plan to rename all the airway navigation waypoints on air route A338 between Christchurch, New Zealand, and McMurdo Station, the U.S. base in Antarctica, after eleven of the unsung heroes and heroines of early Antarctic exploration: Roald Amundsen's sled dogs and Robert Falcon Scott's ponies.

This week that plan finally came to fruition. The National Geospatial-Intelligence Agency released its latest aeronautical charts with the renamed waypoints, just in time for the beginning of the Antarctic summer, when the continent is most thickly populated with pilots and scientific researchers.

"It took a while, but they really got it," Smith told Daily RFT.

Smith began this project two years ago as a way to honor the dogs and ponies who were so essential to early exploration. Geographical features on the Antarctic land mass can only be named for people, so Smith, an aviator, decided to try for the waypoints instead. There are twelve between Christchurch and McMurdo, each a few hundred miles apart, and Smith knows them well; at each spot, the navigator is required to radio air traffic control with time of arrival, position and weather conditions.

Previously, the waypoint names were randomly-generated sets of letters, each five characters long.

With the help of his friend Lynne Cox, a long-distance swimmer and a writer who is working on a book about Antarctic history, Smith researched the names of the dogs and ponies and worked out abbreviations that would not be too similar to other waypoint names and would not sound ridiculous or crude in other languages.

At the end of 1911, the British explorer Scott and the Norwegian Amundsen engaged in an epic race across the Ice to be the first to reach the South Pole. Amundsen's party, traveling by dogsled, planted the Norwegian flag on December 11. Scott scorned the use of dogs. (He wrote, "In my mind no journey ever made with dogs can approach the height of that fine conception which is realized when a party of men go forth to face hardships, dangers, and difficulties with their own unaided efforts.") Originally he'd brought ponies to pull the sledges, but the ponies couldn't handle the ice and snow and were shot en route and then men took over.

The British finally arrived on January 17, 1912, just 34 days after the Norwegians. Tragically, they ran into a blizzard on the way back to base camp and all perished. Scott's diary, which he kept till the bitter end, remains one of the greatest documents of the heroic age of Antarctic exploration and is probably why he is considered so much more heroic than Amundsen.

In any case, the dogs and ponies are equally honored. Waypoints have been named for the dogs Uroa, Mylius, Per, Frithjof, Lasse and Helge and the ponies Jimmy Pigg, Bones, Nobby, Snippets and Jehu. The twelfth waypoint, the last one before the Antarctic mainland, retains the name BYRRD after a human, the American Admiral Richard Byrd. 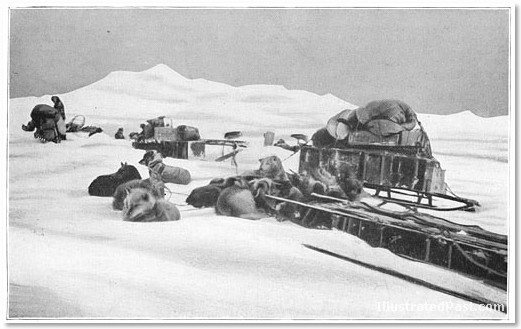 Smith himself has the softest spot for Helge. "It's a particularly poignant story," he says. "Amundsen made it to the South Pole with seventeen dogs. Helge was weak, and she was the only one killed at the South Pole. It inspired me to write a poem about the dogs and her plight." (Of Amundsen's dogs, only eleven, including Uroa and Mylius, actually completed the return journey. The others died on the way.)

Though you faltered before the fame, the untamable terrain; breed of exalted wild-ones, we did succeed amidst your slaughter...

Plans have been made for the U.S. embassies in Oslo, London and Christchurch to present framed copies of the new aeronautical charts to representatives of their host countries. Smith hopes to attend at least one of the ceremonies and maybe take a flight down route A338 for old times' sake.

Meanwhile, he continues to work on his other projects, including an artistic collaboration with the sculptor K. A. Colorado. Smith has discussed the possibility of putting some of his and Colorado's sculptures on permanent display at Christ Church Cathedral downtown.

"I think it's going to be impressive," he says of the sculptures. "It just takes a little time."