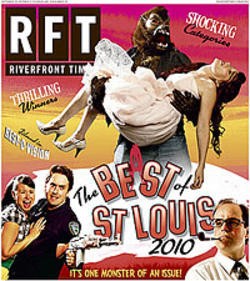 In honor of this year's Best of St. Louis issue, which hits the street today (woohoo!), we at RFT wanted to honor a different kind of "best" -- the best contributions from you, our readers.

In the last year, your comments have made us laugh. They've made us cry. They've occasionally made us tear our hair out.

We've compiled some of your most memorable responses after the jump.

10. Larry Conners gets literal
The longtime anchor at KMOV responds to Ian Froeb's blog post Does Larry Conners Have to Tase a Bartender?, which suggested Larry had complained about an insufficiently strong libation.
Regarding Ian Froeb's article on my wife, Janet, and me at Jeff Ruby's Steakhouse. I'm not sure what the purpose was, but I'll take it for a laugh. I can't complain when Ian says that I look "tan and fit." I certainly appreciate Ian's wife thinking that I look "handsome." Please thank her, but tell her that she might need glasses. The truth is: Janet makes me look better than I am.

Now, concerning my complaint about our drinks. ...So what were the problems? Jeff Ruby's and our server, Matt, did a superb job that night, but I'm sure they got a little behind. So, when Janet's martini arrived it was not cold, not even cool. It was warm. I am not a martini drinker, but cold is better. As Janet says: "I like it very cold. Shake it like you stole something."

Regarding my statement that my drink wasn't "brown enough": Jack on the rocks should not be Jack with water. Our server, Matt, understood and was more than happy to make the drinks right. So, I never even considered "tasing" him. I did say that I live by the rule: When you serve Jack with water, you ruin two good drinks.

RFT's intrepid "editorial fellow," Kase Wickman, filed a (dare we admit this?) vaguely mocking blog post about a UFO convention in Columbia, Missouri. Apparently, that was a pretty good indication to conventioneers that Wickman herself was once abducted by aliens -- or at least co-opted by "disinformation agents."

Congratulations on insulting numerous pilots, police officers and military personnel to include several generals from multiple nations, not to mention thousands of honest people who never expected or even wanted to see a UFO, but who did.

If you are a disinformation agent and you're not getting paid for it, I agree with the others who have submitted comments about your article: You suffer from ignorance and arrogance, always a dangerous combination. If you are on the payroll, please tell us which Black Budget Agency pays you to write such junk!

-- James Clarkson, via the Internet

Okay, we can't help ourselves. Here's another UFO-er, using the powers of deductive reasoning on Wickman's brief report.

To Kase Wickman: It sounds to me like you are in hysterical denial. Which could also mean you have been abducted yourself. Your closed mindedness goes way beyond to [sic] norm.

-- Glenda, via the Internet

When RFT broke the news that direct-sales giant PartyLite was suing a former vice president, allegedly for recruiting the sales reps who worked under her for a different direct-sales company, the sweet Tupperware-style vendors at PartyLite turned nasty. Here's one self-described PartyLite vice president chastising her peers for their laziness and, um, obesity.

To all the Haters, I guarantee the majority of you are mad because MG carried your asses. She took care of all of you and I am sure it wasnt easy to carry all those fat asses. I bet you are uneducated, low class, lazy and are all an average of 40-50 lbs overweight. Well at least  95% of you.
I am a PL VP and cant stand you lazy petty women. You are not sales people. you ride the coat tails of us successfull [sic] women. Get lost and loss [sic] a few lbs!

-- PartyLite VP, via the Internet

While we're talking obesity ... A post on RFT's food blog, Gutcheck, "More Meat in the Morning," described a new breakfast sandwich from Hardee's, noting (for the record) that it contained a whopping 830-calories. That was the last straw for one reader.

What's up with news articles and agencies and reporters dogging companies for making something that YOU DON'T HAVE TO BUY IF YOU DON'T WANT TO? What's this "2000 calories we're all supposed to adhere to?" It seems like the daily brainwash going down in this country is...EAT LESS FOOD...BECAUSE WE ARE MESSING UP THE ECONOMY AND YOU ARE GOING TO STARVE ANYWAYS SO GET USED TO IT BEFORE IT HAPPENS!" My family has eaten "down home food" for generations and many live into the 100's. Guess we should all try to starve ourselves and snort coke like the Olsen Twins so maybe I can get a girl to look my direction. In this day and age, we need more hate and discrimination ...especially against those who are still actually able to buy what they want with the money they earned from slavery.

-- Same Starvation Propaganda, via the Internet

-- Discretion, via the Internet

And now for a break in our usual formatting ... PIGEONGATE

When RFT broke the news that rockers boy band Kings of Leon had fled the Verizon Amphitheater stage after playing just three songs, supposedly after being shat on by a local pigeon, readers outdid themselves trying to put into context the sheer pussiness of the band's behavior. Naturally, more than one reader noted that Ozzy Osbourne would have grabbed the bird and bit his head off. But that was a mere launching pad for our readers' creativity -- leading to our top four reader responses of the year.

4. What would Courtney Love do?

This makes Courtney Love's recent show look polished and professional. Except she wouldn't have quit if a pigeon shat on her. She would have sued it.

-- Robin, via the Internet

Iggy Pop woulda climbed to the rafters, grabbed the bird and took a shit on it. God, rock stars are such pussies nowadays.

Anonymous, via the Internet

If this would have happened at a Ted Nugent show he would have whipped out a .44 magnum or shotgun and started kickin' some pigeon ass! Problem solved. BTW Chuck Norris wouldn't tolerant this behavior either. He would have shit upwards on the pigeons.

-- Double T, via the Internet

1. And, for the most rockstar behavior of all, Lux Interior:
Is this what passes for rock'n'roll among today's youth? For shame. The late great Lux Interior would have SNORTED the goddamn pigeon shit and kept performing.
-- Realist, via the Internet

Did we miss your witty response? Do you remember something that someone responded with that was even funnier?  Or, do you have an idea for what the Kings of Leon could have done to outdo Lux Interior? Let us know in the comment section below.