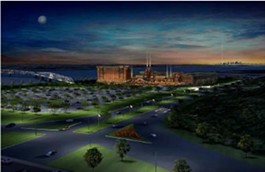 Got anything to say in support or opposition to two casino proposals currently under consideration in St. Louis? Then head on down to the Renaissance Hotel at the airport a.s.a.p.

That's where the Missouri Gaming Commission is holding hearings today (one at 9 a.m.; another at 10) on the state's 13th (and final) casino license.

The first proposal up for discussion is one planned for north St. Louis County. In our estimation, this plan is the long shot as it would be constructed near a conservation area and is opposed by a dedicated core of environmentalists and St. Louis County Executive Charlie Dooley.

The other proposal would be built in north St. Louis at the southeast corner of Interstate 270 and Riverview Drive. That proposal has fewer critics and is actually being championed by city officials who hope it could provide new tax revenue, especially after the downtown President Casino was stripped of its license earlier this year.

Casino Celebration would include a $131-million gaming facility and a $26-million hotel to be built in its second phase. It would also contribute to the funding and upkeep of nearby bike and hiking trails that run across the old Chain of Rocks Bridge.

Developer Koman Properties, which also owns and operates the Casino Queen in East St. Louis, expects that Casino Celebration would contribute nearly $11 million in city taxes and $30 million in state taxes each year.