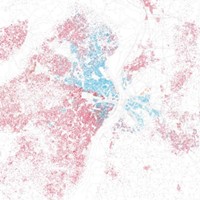 File this under "cool infographic of the day."
Eric Fischer, a (by all evidence) nerdy dude from California who is very interested in cities and how they work, used the 2000 Census data from the 40 most populous cities in the U.S. to make maps that visualize the racial segregation in all those cities. Beyond being kinda pretty, the maps show simply just how segregated cities really are.
Click behind the jump to see the full-size image, a key and links to the rest of Fischer's maps.
[image-2]
​Each dot represents 25 people. The red dots represent people who self-identified as white, blue dots for black, green for Asian, orange represents Hispanic and gray is "other." (Before weo go all politically correct on all Asian countries being grouped together, or any other racial hairs we'd like to split today, please remember that this was compiled using Census Bureau data, which is, shall we say, slightly less than subtle and nuanced.)
Interesting how the little pie slices of blue fan out like that. Check out the map on Fischer's Flickr account to see tags and comments from St. Louisians. Also take a look at Fischer's other maps (Detroit's and New York's visualizations are rather dramatic), and take a look at some of the discussion around the web.