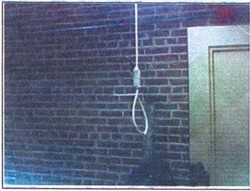 Of the dozens of cases he's brought to trial over the years alleging workplace discrimination and mistreatment, attorney Jerome Dobson says none has been as emotional and personally taxing as the one concluded Friday accusing the St. Louis Sheriff's Department of condoning racism within the department.

That story began back in July 2006 when sheriff deputies horsing around in the basement of the Civil Courts building hung a noose from the ceiling near where a group of black prisoners were waiting in a holding cell for trial.

Not all the deputies thought the gallows humor funny. William "Patrick" Hill, a black man then in his late 50s who has worked as a sheriff deputy since 1992, snapped a picture of the noose on his cell phone. Later that day he showed it to colleague Jacques Hughes, another black man in his 50s who'd worked for the sheriff's department for nearly a decade.

The men were besides themselves. For them the noose remains a powerful symbol of hate from their childhoods growing up in the Civil Rights Era. Moreover, they saw it as yet another racially hostile incident within a department where white colleagues who had referred to black co-workers as "niggers" and "porch monkeys" faced little more than a slight reprimand from Sheriff James Murphy.

"The next day Jacques told an investigator within the department that Murphy, who was away on vacation at the time, needed to make a strong statement on the issue and institute an anti-harassment training," says Dobson. "Later Jacques sent a letter asking for a sit down with the sheriff. Nothing happened."

In November, Hughes met with Dobson to discuss the issue. "I sent the sheriff's department a letter asking for a meeting," he says. "They responded with a fax, telling me that they investigated the matter, found it to be a 'joke' and had placed letters of reprimand in the files of the people involved in the incident. To me their response was a big 'eff you. They slammed the door in our face."

Eventually Dobson would file suit on behalf of Hughes and Hill alleging that the sheriff's department fostered a racially hostile environment and that it retaliated against Hughes and Hill for complaining. Hughes was fired from the department in 2008 for violating the agency's residency requirement. ("So many other employees were in violation of this policy that Jacques didn't think it was enforced," says Dobson.) Hill, meanwhile, was transferred to the graveyard shift.

After three years of wending its way through court, the case finally went to trial this month with a special judge brought in from Jefferson County to hear the case. (The St. Louis sheriff's department acts as the police department for the courts, which barred any St. Louis Circuit Court judge from hearing the case.)

Following a two-week trial a jury composed of 10 whites and two blacks reached its verdict on Friday. The jury didn't buy the retaliation claims that Hughes lost his job and Hill was demoted because of their complaints. But they did agree 9-3 that the sheriff's department -- under Murphy's control since 1989 -- was a racially hostile environment.

"The kicker was Murphy's testimony right before the jury considered the punitive damages," says Dobson. "Asked if he was sorry about the noose incident, Murphy responded that he was sorry my clients took offense to the situation. I think that really angered the jury."

All told the sheriff's department now owes Hughes and Hill $850,000 in actual and punitive damages -- money that will be paid by taxpayers.

Related Content: Is the Noose An Inherently Racist Object?