According to the Old Farmer's Almanac, in bookstores this week, we are destined to have a cool, dry winter with less snow than last year. And next summer should be cooler, too. Rejoice, o St. Louisans, because the venerable old Almanac, which has been predicting weather for 219 years and counting (its first edition came out when George Washington was president) boasts an 80 percent accuracy rate.

Of course, that also means it's wrong 20 percent of the time, including last winter, when it predicted the average temperatures in St. Louis would be .2 degrees higher than normal, when actually they turned out to be 2.5 degrees colder.

The Almanac's editor, Janice Stillman, defends the integrity of her publication. "I don't believe anyone is 100 percent accurate," she says. "The only perfect climate is in bed." (Those of us who have endured summers without air-conditioning would beg to differ. Mattresses are depressingly good at absorbing heat.)

The Almanac itself recommends close observation of the woolly bear caterpillar, which, contrary to what Stillman claims, is never wrong:

Everybody knows that the ratio of black bristles to rust on the woolly bear fortells the coming winter: More black bristles mean a hard winter; more rust, a mild one.

In addition to observing insects, the Almanac makes its weather predictions based on three factors: sunspots; climatology, or the study of prevailing weather conditions over the course of many years, and meteorology, the study of the atmosphere.

"Sunspots are magnetic spots on the surface of the sun," Stillman explains. "They look like little black spots. Not that we recommend looking at the sun." The frequency and size of sunspots changes every year. Right now, sunspots are small and few and far between, which indicates a cooling of the earth's atmosphere. 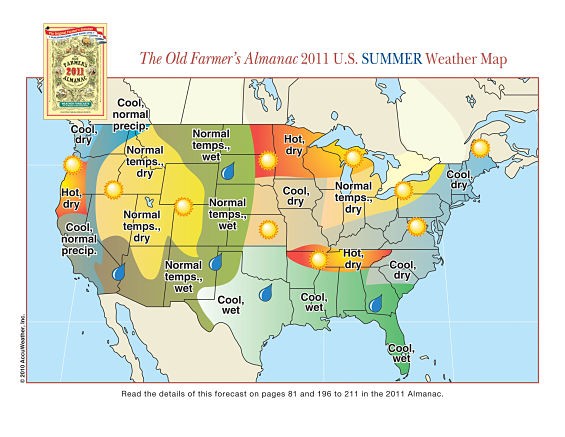 "One circumstance that's not measurable," Stillman adds, "is greenhouse gases. The gradual cooling will be offset by the greenhouse gases and nobody can completely forecast the effects that will have."

The Almanac predicts many other things besides the weather. This year it forecasts that instead of building additions to their homes, people will be constructing tree houses to use as offices or guest rooms. They will experiment with bricks made from dried mushrooms, which trap more heat than fiberglass. They will retreat to "cave-like beds" with built-in TVs, sound systems and wine coolers. They will compete in pogo-stick competitions and experiment with eating cotton because the seeds are rich in protein.

(Stillman says it's fun to go back and look at old issues of the Almanac, particularly from the 50s and 60s, to read up on past trends.) 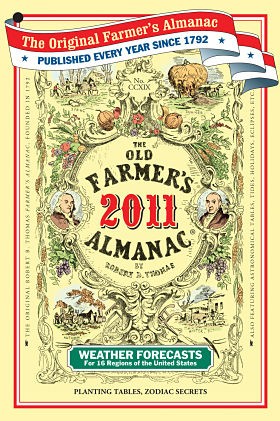 Aside from the weather, though, the most popular section of the Almanac is astrology. In addition to predicting what kind of year you'll have, astrologist Celeste Longacre suggests the best days of every month for special activities, from the earth-oriented, like planting, harvesting and pruning, to the more personal, like starting a diet or cutting your hair.

According to the current edition of the Almanac, the best days in November, 2010 (the first month it starts making predictions), to castrate your animals are the sixth and the seventh.

"On those days, the animals don't bleed as much," says Stillman. "The moon phases affect the amount of moisture in the air."

Well, then. There seems to be something to this astrology business after all.