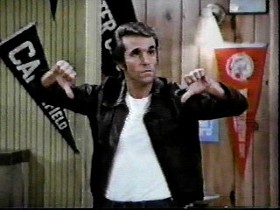 So Jaime Garcia had a really, really bad night yesterday. I mean really bad. The type of bad we hadn't seen up until this point in his career. Seven runs in just four innings. Not at all the result we've come to expect from the Cards' lefty phenom.
Of course, it was bound to happen at some point in time. No pitcher goes through an entire season without having at least one or two really, really bad outings; even Chris Carpenter in 2005 had a couple games where it seemed like he just couldn't get anyone out. Those nights are going to happen.
(Quick, odd note on Carp's 2005 campaign after checking Baseball-Reference to see what that season looked like. Carpenter's second and second-to-last starts were both blowups. April 10, 2005, vs Philadelphia: 3.1 innings, 10 hits, 8 earned runs. September 23, at Milwaukee: 5.1 innings, 12 hits, 9 earned runs. He gave up 9 earned runs total in the months of June and July combined. No point, really; I just thought it was interesting.)
What I'm really concerned with, though, is what that bad outing last night may have done to Jaime's candidacy for Rookie of the Year.

Seeing how rough the Cards' season as a whole has been, especially this late-season collapse they're currently in the middle of, I find myself looking more and more at individual achievements, in the hopes of seeing a team that finished out of the playoff picture sweep the major individual awards. It just seems to me that would be the most poetic and appropriate epilogue for this bastard of a season.
A couple weeks back I looked at Garcia's season to date against the numbers put up by Jason Heyward and Buster Posey, the two players we most often seem to hear mentioned in relation to the ROY award, and concluded that, by at least some statistical measures, Jaime has had a significantly better season than either.
After last night's struggles, Jaime's ERA for the season jumped from just 2.35 all the way up to 2.69. (Still remarkable, of course, but to see an increase that large this late in the season is pretty noteworthy in and of itself.) He was also saddled with his seventh loss of the year. Garcia wasn't awful, strictly speaking; he managed to pitch around Brendan Ryan's error on a ball that should have been a double play, and the three-run third inning was more about grounders finding holes than Jaime getting knocked around. The fourth inning was ugly, though.
Anyway, since my previous column Posey has struggled badly. He has hit .217/.265/.391 since the 24th of August, which would look perfectly at home in the batting line for a Cardinal catcher but isn't at all what we've seen so far from Posey. (Sorry, couldn't help taking the shot at our guys. I'm a bad person.) Buster has been suffering from the batted-ball blues during that time, as his BABIP is just .211. He's still only struck out 6 times in 49 plate appearances, so he isn't struggling to make contact, but he also has just 3 walks in that time. You put the ball in play that much, and you're going to have stretches where nothing falls in, just like those stretches when everything falls in.
Heyward, in contrast, has been absolutely on fire the last two weeks, batting .393/.479/.590. That's being driven by a .512(!) BABIP, so he's essentially sucking all the luck Posey should have and transferring it to himself. Heyward has a 16/10 K/BB ratio over 71 plate appearances during that time, so he's still doing a nice job with his pitch selection. I hate to say it, but I think this late-season hot streak may just have sewn up the ROY award for Heyward.
Garcia had been very good in his last two outings before last night, but his ERA in three starts since the 24th of August still stands at 5.06, with an .857 OPS allowed. Most of that is last night, of course, but even two starts before against Washington Jaime allowed twelve baserunners in just five and a third, managing to pitch out of trouble all night without giving up a run. So he's still been good overall, but not as sharp as we've seen him at various times this season.
I said in my previous column that I thought OPS+ and ERA+ were good measures to use in comparing pitchers and hitters, as we can directly compare how good each have been relative to their peers. After last night's game, Jaime's ERA+ for the season stands at a still-impressive 149. Posey's OPS+ has fallen to 127 from the 136 it was when I wrote my previous column. Heyward's OPS+ for the season is now 134.
Based on those numbers, I stand by my previous assertion that Jaime Garcia is, in my ever so humble opinion, the most deserving candidate for NL Rookie of the Year this season, at least at the moment. He's still been better relative to the rest of the league than either Heyward or Posey, though Heyward's hot streak, coupled with Garcia's recent shakiness, has narrowed that gap. Garcia will likely have about four more starts this year to make his case; if he can dominate in those the way he has at various other points this season he could bump his stock up significantly.
Overall, though, I think Heyward will probably win it, unless he goes into a terrible slide in the near future. He's pushed himself above Posey with a good two-week hot streak, and his component stats are better going forward. Add in the hype factor and the difficulty pitchers face in being on the field much less often than position players, and I get the feeling Heyward has definite leg up on the competition.