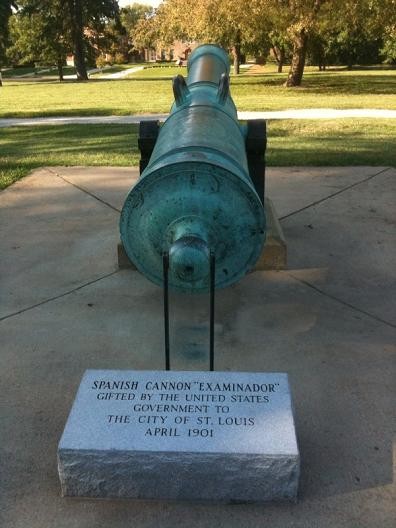 For years now Ruhrwien, an 81-year-old volunteer tour guide at Forest Park, has toiled to give an old Spanish cannon in the park the recognition he believes it deserves.

Riverfront Times has chronicled Rurhwien's quixotic quest a couple times as he searched to uncover the history of the cannon that no one -- from park staff to city historians -- seemed to know anything about.

Finally, last fall, a new archival database at the Missouri Historical Society popped up a few articles about how the cannon arrived in St. Louis in 1900 as a gift from the War Department.

The cannon sat in storage in Forest Park's horse stables for a year before a Post-Dispatch op/ed prompted park officials to publicly display the cannon. The massive gun -- forged in 1783 and presumably captured during the Spanish-American War -- was placed east of the History Museum with no placard to tell its story. Over the decades its history forgotten.

Last September, Ruhrwein petitioned the mayor's office and the park's department to place a sign near the cannon. And, finally, that day has come. The new granite marker states:

"SPANISH CANNON 'EXAMINADOR' GIFTED BY THE UNITED STATES GOVERNMENT TO THE CITY OF ST. LOUIS APRIL 1901."

Actually, per the old newspaper articles, the cannon was actually donated to the city in 1900 before being publicly displayed a year later.

But, hey, like horseshoes, hand-grenades -- and cannon shot -- it's close enough.

Cannon Fodder: The mystery of the Spanish gun in Forest Park