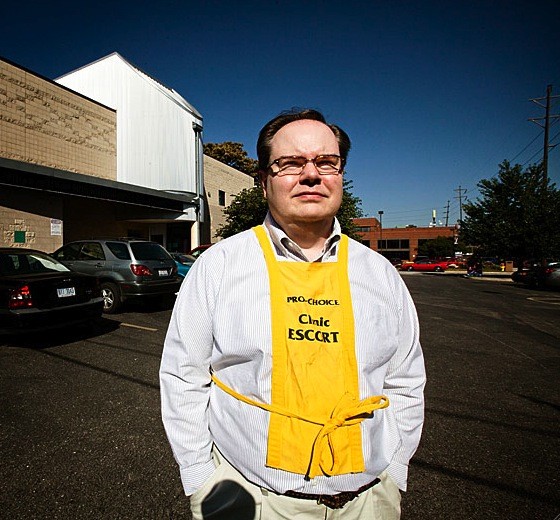 Men aren't only the latest bargaining chips of abortion rhetoric -- increasingly, they are volunteering for the cause and getting involved in a significant way.
One Saturday each month, Jeff Farris, 46, pulls on a neon yellow vest and stands in front of Hope Clinic in Granite City for about four hours, staring down crowds that can swell to 150 sign-waving, pamphlet-pushing protestors, all determined to convince women entering the clinic to change their minds and keep their babies, regardless of their circumstances.
Farris is himself childless. He stands stolidly between pregnant women or couples and the anti-abortion protestors, shepherding them to the clinic doors, to a decision he's never had to face himself. The protestors call him "every four-letter word in the book," he says, they try to shove and pull him away from the patients, and they even sprint, racing him to arriving patients' cars.
Throughout the six years he's been volunteering as an escort, he's thought about quitting many times.
What keeps Farris going, however, is the same thing that inspired him to strap on the neon vest in the first place, more than half a decade ago: A woman telling her own story of trying to have an abortion after finding out that her baby was terribly deformed. Her pregnancy was too far along, however, and she was refused at every clinic she went to.
"I heard her own personal experience, how gut-wrenching and horrible it was for her to not be able to get an abortion when she really needed one," says Farris. "And then just hearing what people have to go through -- I mean, I knew it was bad, but until I actually heard her talk about it, I had no idea how bad it was."
He decided that he would do everything he could to help women who needed abortions, for whatever reason.
"Being a clinic escort was something I could do to directly help women access the right to abortion, so that's why I got involved," he says.
"No one really wants to have an abortion. It's a difficult decision for anyone to really come to that point, and women give it a lot of thought. It's been a difficult road for them before they even get to the clinic, and then when you have to walk through all those people just to get the clinic. Every Saturday when I'm there to escort, there are always one or two people who just drive off because they can't face the protestors."

Farris isn't alone in his involvement.
Graham Krueger, 17, a senior at Parkway North High School in St. Louis, said he began phone banking for Planned Parenthood this summer not only because "it seemed like the right thing to do" and a good way to build his political resume (he hopes to work professionally in politics one day). The impulse came from a deeper place as well, he says.
"I think that it's really very important to safeguard our constitutional right to privacy. I don't think women should have that taken away from them just because they get pregnant," Krueger says. "I think safeguarding women's rights is a human rights issue."
And, indeed, Drexel University sociologist Arthur Shostak, whose work studying male partners of abortive women is featured in "She's Not There," says that he's driven to study the "waiting room men" because he was one himself. Shostak advocates for better conditions and services for men in abortion situations, remembering the coldness and neglect he felt decades ago.
He defends himself in an essay on Claire Keyes' Men and Abortion site: "Several years later, with the memory still a 'live nerve' source of both pain and relief, I found myself drawn to research the subject of men and abortion. I have never understood sociologists who study topics they have not 'lived,' and who dare to offer 'findings' at one remove. I respect their effort at immersion and empathy, but have my doubts."
Farris said he believes that once abortion becomes personal in some way for men, more of them will be motivated to become actively involved in pro-choice action.
"It's not just someone that's a statistic, it's your mother, your sister, your wife, your best friend, someone you went to college with--it's someone you know. It's not just a statistic, it's not just some women that you've never met, it's women all around you that you care about, that are part of your life, and that you're friends with," he says.