Comical: The Justice League Appeals To President Obama On Behalf of Dogfighters 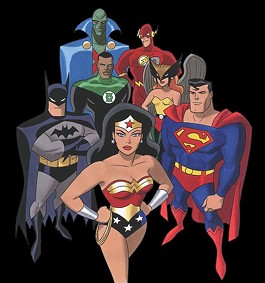 You have just been convicted of taking part in a dogfighting conspiracy and sentenced to sixteen months in federal prison. You feel that the trial was a miscarriage of justice and that the judge's punishment was excessive.

A: Have your public defender appeal the ruling.

B: Contact the media and plead your case to the press.

C: Ask an ex-con running an organization named after a group of comic book characters to write a rambling 6,000-word letter to Barack Obama, requesting a presidential pardon and accusing three federal judges of treason.

The answer? All of the above.

John Bacon, a 37-year-old carpenter from Washington Park, and six of his associates were arrested last July and charged with taking part in a multi-state dogfighting ring. (See this week's feature story for details.)

The court immediately appointed an attorney, James Stern, to represent Bacon in his trial. Two months later, Stern unsuccessfully tried to withdraw from the case stating in a court document that Bacon "never responded to any of counsel's letters or telephone calls."

The following month, Bacon -- a high school dropout with no legal training -- tried to fire Stern in order to represent himself pro se in the case. U.S. District court Judge Michael Reagan tried to dissuade Bacon from jettisoning his attorney, noting that he had previously worked as a public defender and that Stern "trained me in how to handle criminal cases."

Bacon briefly dropped Stern and represented himself, then changed his mind and decided to retain the attorney for the remainder of the trial. Bacon and all of his co-defendents eventually pleaded guilty. They have appealed their sentences.

But while most his friends went quietly into the night, Bacon refused to give up the fight. He contacted Riverfront Times and handed over several undercover recordings made by detectives in the case (see our posts here and here for more on that).

He also contacted Bobby Worthy, the founder of a group called The Justice League. The group shares the name of the famed superhero alliance created by DC Comics but Worthy, in a phone interview, describes it as "a non-profit organization trying to bring back the constitution."

According to the Georgia Department of Corrections, Worthy was convicted in 1993 of first-degree forgery and served a year in prison. He says he founded the Justice League earlier this year to "start a treasury department for people who need lawyers," but his voicemail system says the group "caters to all of your business banking and financing needs and specializing in credit repair."

In any case, Worthy began campaigning on Bacon's behalf because "people have really lost their minds with this dogfighting thing." He goes on to say that the federal government had no right to prosecute Bacon because it "lacks exclusive jurisdiction" in Illinois.

That's exactly the same point Worthy attempted to make in a letter he sent to President Obama on behalf of Bacon and three of his co-defendants.

The document is riddled with punctuation and spelling errors and cites obscure case law that dates back to the late 1700s. Worthy alleges that Reagan and two other judges are guilty of treason for over-stepping the bounds of the federal government and "conspiring to illegally imprison," the dogfighters.

You can attempt to read the whole bizarre document right here: Letter to President