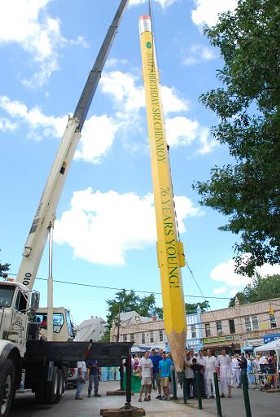 The City Museum will be closed on Tuesday, but rest assured that when it opens on Wednesday, there will be one more thrilling attraction at the city's most thrilling (and lawsuit-prone), um, attraction.

That would be the World's Largest Seesaw. It measures 79 feet and two inches long, stands six feet and ten inches high at its fulcrum and can go as high as eleven-and-a-half feet in the air.

It was constructed by Ashrita Furman, who also constructed the World's Largest Pencil (76 feet and 2.75 inches long), which also resides at the City Museum. Ashrita, as he prefers to be known, holds the world record for having the most world records (somewhat meta, no?). Since 1979, when he did 27,000 continuous jumping jacks, Ashrita has set more than 225 records, but only 122 still stand.

"Ashrita donated the pencil to us because he didn't know what to do with it," explains Tracey Lariccia, the City Museum's group director. (That would be a problem.) Thus began a beautiful and mutually-beneficial relationship between world record-holder and museum.

Lariccia says the museum hasn't made any plans for the seesaw yet. "We're going to wait till it gets here on Tuesday and see what [museum director] Bob [Cassilly] wants to do with it."

Here's hoping that the museum decides to let people play on it. It would be fun to play on the World's Largest Seesaw, plus the potential for new lawsuits will be tremendous.