Normally by the time the final preseason game rolls around for an NFL team most of the decisions have been made already. Sure, there will be a marginal spot or two, down on the depth chart somewhere, but the big spots have pretty much all been decided in camp and games.
Not so with the Rams this season. A big part of that, of course, is just the fact this team is coming from a place so far down in talent, but one key injury to an expected major contributor has really rearranged the normal schedule in a big way.
Donnie Avery came into camp the favorite to win the number one spot on the receiver depth chart. He has the kind of top-end speed to be a threat both on the deep ball and to lose a defender on even an intermediate sort of route. There have been questions about Avery's hands in the past, but the ability to break a big play once he gets the ball cannot be denied.
Unfortunately for the Rams (and Avery himself), he's now out for the season with a torn ACL in his knee, so the cards need to be reshuffled and the Rams need to try and find someone to catch passes from their talented young quarterback.
Some of the onus will fall upon the tight end position, I'm sure. Michael Hoomanawanui has played very well throughout camp and has stabilized his role on the offense. He'll likely be a big part of the Rams' attack this year, giving Sam Bradford a possession option to throw to. Daniel Fells, if he can stay healthy, is probably the most consistent TE for the Rams, particularly on the blocking side of things. Fendi Onobun has also impressed the coaching staff in camp with his freakish ability, though he's certainly much further away from being ready to contribute on a regular basis.
Still, though, no matter how much the tight end position may contribute, the Rams are just going to have to find players to contribute at the wideout position. That's a bit of a daunting proposition, of course; the Rams' receiver corps is ridiculously young and inexperienced. They're a fairly talented group, but you one has to be seriously concerned about such a severe lack of battle-tested options. Regardless of how the Rams might prefer things to be, though, they're going to have to go with what they've got. So let's take a look at just who the options to fill the WR depth chart are, shall we? 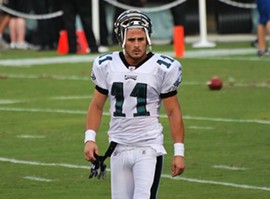 ​The thing about Gilyard is his tools don't really jump out at you. He's fast, though not exceptionally so by wideout standards. He isn't all the big, either in height or frame. What he does have is a great pair of hands and, more importantly, an almost uncanny ability to find a seam in the defense. I hate to toss around intangibles (I'm not as much of a measurables guy in terms of football as I am baseball, but it's close), but Gilyard just has that feel for the game that allows him to get open play after play. He reminds me a bit of Tory Holt, to be honest. Holt was fast, but not fast enough to explain why no one could cover him. He just somehow always found the soft spots in the coverage, and I see a little of that in Gilyard as well.
These aren't the only options for the Rams at wide receiver, of course; I'm a huge fan of Danario Alexander, the undrafted wideout from Missouri they signed this offseason. He didn't get a whole lot of play from draftniks, but at 6'5" he has a ridiculous height advantage on just about any defender. Keenan Burton seems to have a lot of support from the coaching staff, but I'm a little less sanguine on him. To my mind, these four receivers represent the Rams' best bets to field a productive unit week in and week out.
If it were up to me, Gibson and Mardy Gilyard would be the starters, with Amendola getting consistent snaps out of the slot. Robinson is all tools and no production in my mind, and just hasn't impressed me when I've seen him play. I certainly wouldn't dismiss him, but he's not at the top of my personal list. Most likely though Robinson gets the top spot and Gilyard drops on the depth chart. I think Brandon Gibson's possession skills will ensure him a steady stream of playing time and passes coming his way this season.
In the end, it could be a tough season for the Rams' young wide receivers. Sam Bradford is immensely talented and a remarkably accurate passer, but he's also a rookie quarterback and as such subject to some serious growing pains. The receivers themselves will probably have plenty of their own growing pains. There's actually quite a bit more talent here than what we've seen the last few years, but that talent comes with even less experience than we're used to.