Note to Detractors: RFT Does Some Good in the World, at Least For Kirkwood Historic Preservation 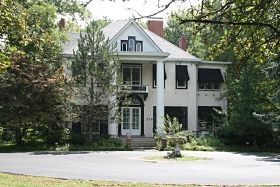 After her husband died, Marianne Burnside put her house at 750 North Taylor Avenue in Kirkwood up for sale. It was just too big for one person, she said. Unfortunately, the 135-year-old mansion, valued at $731,500, went on the market in the middle of the recession. In the past two years, Burnside has received only one offer: from a developer who wants to tear down the property and build four or five smaller homes on the 1.58 acre property.

Other residents of Taylor Avenue were upset. Though none of them wanted to buy the mansion and pay to fix it up (which some estimated would cost more than the actual house), they didn't want to see the old house destroyed. Last month they petitioned the city of Kirkwood to temporarily hold off the demolition so they would have more time to come up with a way to save the house, and the neighborhood.

Among the proposed solutions was turning North Taylor into a historic district. "They wanted to preserve the neighborhood as a whole," says Alan Lamberg, head of Kirkwood's landmarks commission. "And as we were getting more information about the neighborhood, Fielding Dawson came up."

Beth Von Behren, Kirkwood's public communications officer, noticed Daily RFT's blog post about the writer and artist who had grown up at 425 North Taylor but who, in the classic manner of local writers, abandoned St. Louis for bigger places, in his case, New York. His mother continued to live in Kirkwood, however, and Dawson frequently returned to visit her.

Even so, the Kirkwood preservationists hope that Dawson will contribute to the overall historic-ness of the street and save 750. Lamberg hasn't read Tiger Lilies: An American Childhood, Dawson's 1982 memoir of growing up in Kirkwood, but feels certain it will help the cause.